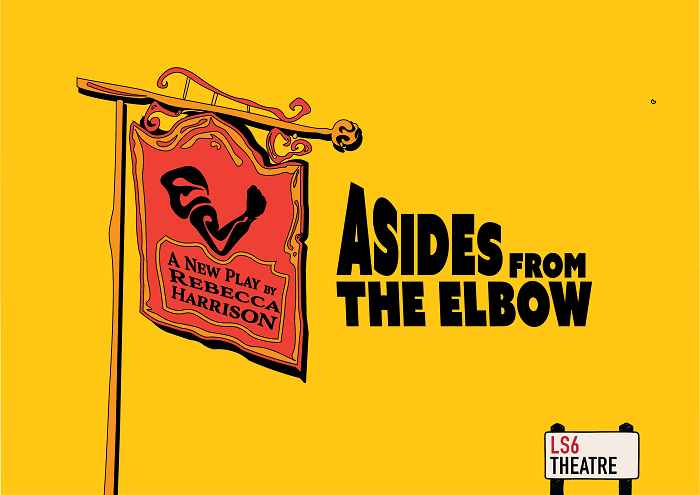 Asides from the Elbow is a melodramatic sit-com style comedy-drama set entirely in the smoking area of a pub, also called The Elbow, in a student city in England. We meet housemates Joy, Perry, Sam and later, his estranged brother Chris. Chris sublet his bedroom out to his brother while he pursued a band career in Bristol, bringing Sam into the fold and leaving him firmly out of it. Their housemate Perry puts on a one-woman variety show every week at the Elbow, and is trying to rope her friends into it. Its not long before even the cheerful Perry is drawn into the drama, and friendships are broken as Chris wants to find his way back into the flat.

The overarching story of the show is easy to understand – its Uni housemate drama set amongst the throws of several nights out down the local. Drama is exacerbated by drinking and the reappearance of Chris, who has been M.I.A even though the rest of the group knew his foray into music had failed and that he had returned to the city. Sam and Joy have questions they want answers, Perry wants everyone to get along until she finds out Chris has been staying with her boyfriend James. Secrets are revealed and we descend into an exploration of friendship.

Asides from the Elbow’s relationship to friendship shows how fraught it can be when you have to share spaces together – be that the flat, the pub or even the stage. Chris feels that his brother has stolen his life by not moving out of the flat, his old friends want nothing to do with him. Meanwhile, Sam and Joy clearly have a thing for one another, but come to realise that they can’t have everything they want all of the time. The plot seems simple and concise, but unfortunately the story’s content is strangely worded and a bit confusing.

There is a long section where Joy and Sam sit and talk about the mainstream, eccentrics and breaking the status quo. We find out Joy is a philosophy student, which explains why she sounds like she is reading speaking Middle English in this scene, but the whole thing feels quite forced and the audience are left scratching their heads as to why any of it was relevant. Some of the performances were a little off-kilter too. By the end of the play, I felt like I knew absolutely nothing about Joy and Sam apart from the fact that they’re young people who fancy one another. There’s little characterisation and they aren’t particularly captivating characters to spend 50 minutes with.

Now we’ve got some of the heftier criticisms out the way – let’s focus on the good, and don’t be put off by the above, there is actually plenty of it! Carrie Clarke’s Perry is an absolute joy to watch – just the right balance of kooky side character and also with a whole arc of her own which sees her grow, reflect and change. She is the real underdog hero of this piece, and I only wish we got treated to some of her one woman show during the story. She drops one-liners and snarky comments like they’re nothing, is sometimes a little bit daft and oblivious, but you’re on her side the whole way through.

Matty Edgar’s Chris was also something of a triumph. His moody, self-absorbed character whines and rattles his way through the story. If the show had one message overall, it’s that you can’t get everything you want and relationships never stay the same. Chris feels the sharp end of this. While he isn’t immediately likeable, the performance from Edgar is sharp and nuanced. We come to see a three-dimensional character from him by the end, someone who has learnt his lesson… for now.

The jokes in the play land really well throughout. They compliment the drama without completely distracting from it, making this show a great balance of frolics and tragedy. It’s a really enjoyable thing to see come together, even if sometimes it comes across a little bizarre and like it might be stretching itself a little too thinly. It sometimes feels like we might have been let in a little too late on the situation to understand the intentions of all our characters, but the aforementioned pair are loveable enough to carry you through.

There was the occasional time where you could see the actors were simply getting their mouths around the words they had to say rather than seeking to convey meaning behind them. Contrastingly, there were also a few moments which came across a little too hammy. These are all things that can be teased out of the show with a bit more practice, and on the whole really don’t distract massively given the whole thing is a wee bit melodramatic anyway.

A loveable, messy little show – Asides from the Elbow is one to watch. It might not be fully fledged yet, but the jokes are funny, sometimes hilarious, and the message by the end comes across poignantly. “Just because you’ve lost something doesn’t mean someone’s taken it from you.” Poetry.

Recommended Drink: Go and buy yourself and a pal a pint, kiss and make up behind the bins before you catch Perry’s variety show.

Fast-paced, fresh and funny to the end. Catch Asides From the Elbow while you can at TheSpace on North Bridge, Perth Theatre, at 15:05 until the 14th August. Tickets are available through the EdFringe Box Office.