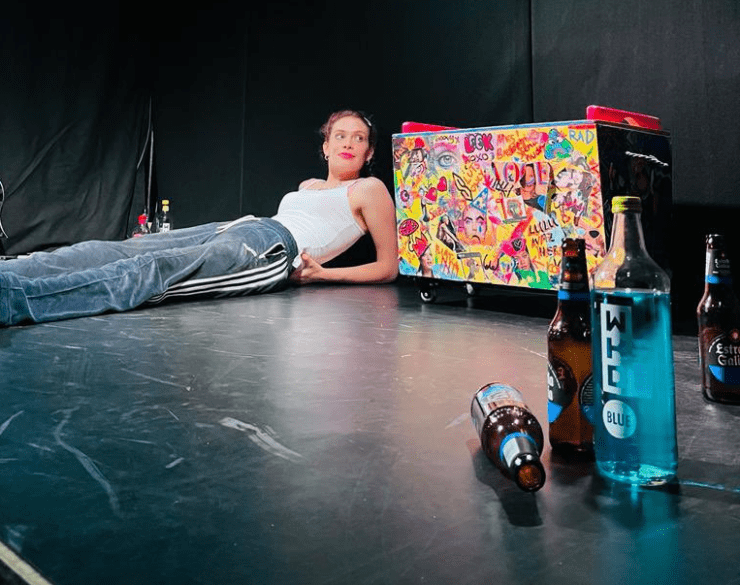 Bluewater is a show driven by a sense of both unfettered queer epiphany and youthful political angst. Layered in 2000s nostalgia, Grace Quigley’s one-person performance as the unnamed central protagonist is the story of a teenage girl uncovering her sexuality against a background of cultural consumerism, New Labour, and subtle but rife homophobia.

The early elements of the performance centre around the eponymous shopping centre in Kent. Quigley’s character is a South London late-2000s teen in the throws of consumer culture. Early on, the piece rotates around her and her peers’ obsession with branded products and their relationship to identity. Victoria’s Secret, Deluxe Cinema, Motorola, Nandos, Blackberry, Forever 21. This is nostalgic, of course, but below the surface the show connects teenage identity with an expectation to partake in consumer culture.

At the outset, Bluewater speaks about teen pregnancy, the misconceptions surrounding being a teenage mother, and an odd symbiotic relationship with ‘JoJoMamanBébé’ (is it even French?). Typical of the Blair-Brown New Labour era, Quigley hits on Middle Class exclusionism. While our character spends her time dreaming of a Baby Stroller, Middle Class women exclude her from their space and banish her to the realms of childhood. Sitting at seventeen, our central character explores the throws of adolescence in a Neo-Liberal society.

It isn’t long before this coming-of-age piece takes to explore the world of alcohol, parties and the expectation to get with boys. Through chats on MSN, she implies sexual tension on an otherwise innocent online conversation. In Bluewater’s vision of 2000s teenage Britain, subtext drives every interaction. This goes from flirting with a McDonald’s worker to a glance across the dance floor at a Queer-coded person. Quigley plays with these themes, culminating in a party scene of mixed gay euphoria and shame. It mirrors the kind of feeling you have as a teenager that your life is a movie, and that you are the main character.

Bluewater’s cut and thrust is made deeply potent by Quigley’s solo performance. She inhabits the body of a 2000s teenager fully throughout, engrossing the audience in a gossamer film of nostalgic light which makes you completely invested in her character. Key to this are her facial expressions. As she places her character in each situation we can sense the underlying tension and frustration in her face – we can see what is crying to be let out. Her characterisation is neat, charming and sentimental. Anyone with memories of sharing their BBM Pin after class or necking a Blue WKD on the street corner of a New Build housing estate will be on side with her immediately.

What is so tidily unpacked in Bluewater is the frustrations and boundaries of a Neo-Liberal world for an upstart youth. Several times throughout the piece, our central character bursts from the Fourth Wall and reflects on the internal agonies from a modern, present-day perspective. It seems as if she were looking back on life and shouting through the cosmos for her younger self to recognise the ills of the system she is constrained by.

Mid-2000s New Labour Britain put an emphasis on the aspirational Middle Classes and convinced them that we could form coherent identities through the veil of capitalism and consumerism. Bluewater is a cry to remember that our identities are formed in the moments that we drop the material and return to the spiritual. When we answer the internal call, the thing we call fate, we drop our facades and return to what is real. For Quigley’s character, that reality is the Queer urges she has suppressed, for her society nonchalantly brushes them under the carpet. Her fate is intertwined with a world that views character as defined by consumption, not by an internal compass guiding her to happiness.

In a discussion of its themes, it’s quite hard to get across just how utterly joyful this piece is. Along with Quigley, Director Jess Coppen-Gardner and Producer Ianthe Bathurst have clearly spent time re-inhabiting the world of the mid-2000s and the pure hedonistic joy it has to offer. Sound Engineer Karima Antoinette spins tunes from Dizzee Rascal to Jamie T and beyond. Back then, the world felt like an oyster – we just didn’t realise that we were the pearl being slammed shut inside.

Quigley’s quips are deeply funny throughout, connecting the piece’s truths back to its deep and important relatability. Uncovering yourself as Queer in a world which is silently repulsed by you is difficult, laughing about it is even harder. Bluewater delivers a deep discussion surrounding suppression, repression and catharsis while never losing its charm or wit. For a late night show, it almost felt like a primer for a night out. This is the kind of theatre which deserves a platform – it connects with Gen-Z audiences and Millenials alike, and puts you in a fucking good mood if you’re heading out on the town.

It’s a word banded around at the Fringe a lot, but this show is a true original. Quigley blossoms completely into a character that you want to spend time in an intimate wee theatre with. Sparkling in a whimsical nostalgic light, Bluewater is a reminder of how we should always look to the past to unlock our future. You simply must see it.

Recommended Drink: No word of a lie, I was going to go to bed after seeing this show, instead I went to the nearest bar and bought a Blue WKD. Maybe I’m the consumerist after all?

Catch Bluewater before it heads downstream every day between August 5th and 28th, except on the 7th and 21st, at 23:00 in Gilded Balloon, Patter Hoose – Snug. Tickets are available through the EdFringe Box Office.