A Digital Pint with… Benjamin Alborough, making an Absolute Monopoly at EdFringe 2022 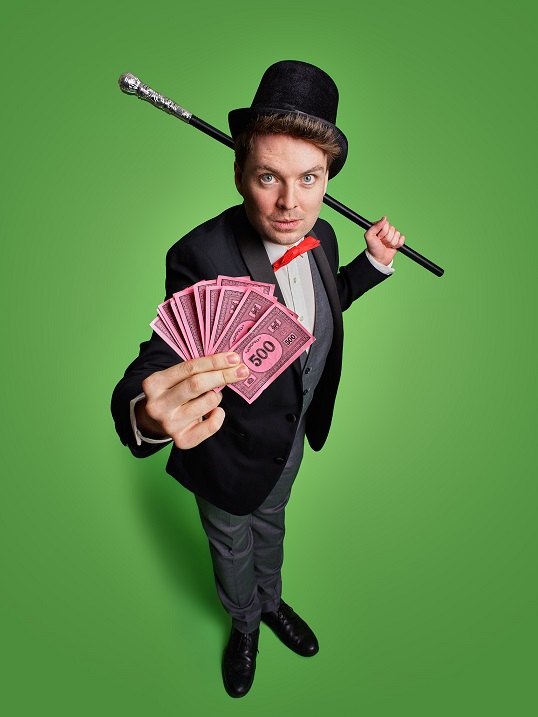 Don’t flip the board – we’re here for a pixelated pint with Edinburgh Fringe’s Monopoly Man himself – Benjamin Alborough. He’s taking his show, Absolute Monopoly, up to Edinburgh in just a few days time. Three years ago we sat down to talk about his Brighton Fringe show: Ricky Riddlegang and the Riddle Gang. We’re here now ahead of his run at Edinburgh Fringe 2022 to talk about making Monopoly an acceptable, friendly and slightly milky experience.

Jake: Hey Benjamin! We last sat down for a Digital Pint… *checks notes* 3 whole years ago! The world’s been flipped upside down since then – how have you been getting on and how’s your involvement with the world of theatre changed since then?

Benjamin: Hi. You’re not going to believe this, but there has been absolutely no change to my situation, positive or negative, over the last three years. That’s not to say that bad things or good things haven’t happened, just that they have happened in so perfectly equal a measure as to be net zero.

I should clarify: the positives are that I have done some brilliant shows with Weirdos Comedy Collective, I’ve taken to streaming which has witnessed the unintentional development of myself as a professional Terry Wogan impersonator and in addition to having a couple of other projects in development I’ve also been producing some theatre.

But this is all balanced out by a single game of Monopoly I played against my family on the 8th June 2020.

Jake: So this year you’re bringing your show, Absolute Monopoly, to the Fringe – why do you think Monopoly ruins so many relationships and have you had a lot of fun playing around with that idea?

Benjamin: Have you ever played Monopoly?! It’s the worst game in the world. But it is also the single most popular and commercially successful game in the world. Is this just because it was one of the first? Pong was the first video game but that doesn’t mean I break it out every Christmas (though I do still get into arguments over it).

Jake: You say the show is going to be an interactive multimedia experience, can you give us a sneak peek of what to expect?

Benjamin: The first step is figuring out how to improve every aspect of the game. This is also the last step. Take a moment, reader, to think about all the problems you have with Monopoly. Well, we add mechanics to fix all those problems totally and utterly.

I don’t want to spoil too much but democracy plays a big part of this rework, as do physical and mental challenges. Also there’s a game where we try to guess which one of three liquids is milk.

Benjamin: I’ve made no pre-bookings and decide what to go to based on looking through the programme on the train up and then from word of mouth. I would strongly advise the best way when putting together a list is to go from gut feeling and to see things that are weird and different; that you couldn’t see somewhere else.

I once went to a very good Italian restaurant with a friend and he ordered a burger because it was the only thing he’d had before. In this metaphor my show is pasta puttanesca.

Jake: Fitting with the themes of our magazine, if your show was an alcoholic
beverage (think cocktails, shots, beers, be creative!) what would it be?

Benjamin: Is there a pasta puttanesca cocktail? I should’ve used a different metaphor.

Jake: Tell me, why do you believe that you can’t make porridge in the shower?

Benjamin: I object to this accusation. I won’t be misquoted on this again; of course you can
make porridge in the shower. The water is perfectly hot enough to make the watery
oats reach a base level of quality, and once you cover it with enough honey, maple
syrup and cane sugar it becomes perfectly edible. What is the ongoing obsession
with interviewers asking me about this?

You can catch Benjamin Alborough: Absolute Monopoly between August 3rd and 7th every day at 21:15 at Gilded Balloon Patter Hoose: Downstairs. Tickets are available through the EdFringe Box Office.