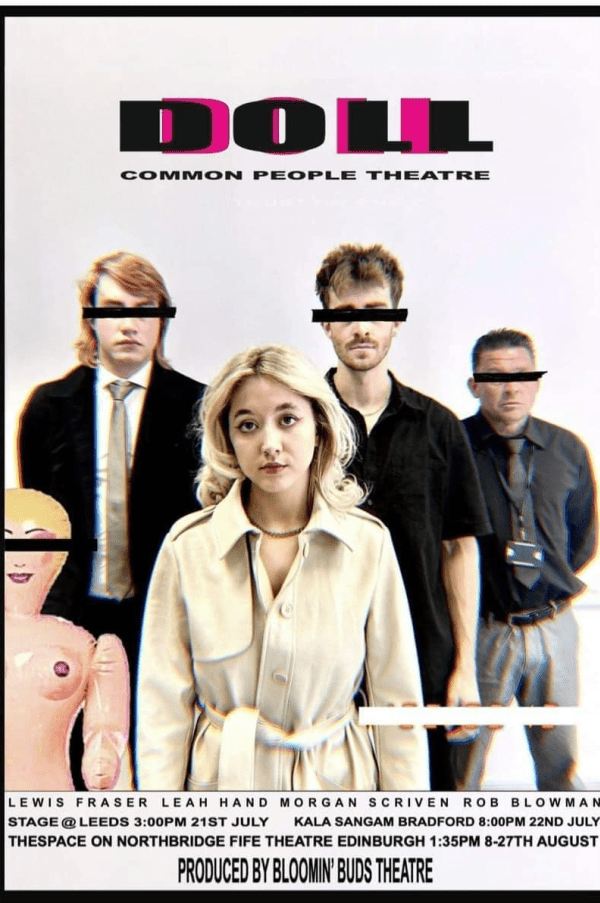 You’d do anything for your partner, right? If Common People Theatre’s Doll is anything to go by, maybe call the red flag at selling Sex Dolls. The show is a darkly comedic twist on your classic ‘don’t trust strangers’ TIE piece. Slap the don’t trust posh boys from London card on it, I’m all in. Liverpudlian Fleabag dashed with a level of intensity reminiscent of a crime drama, and you’ve got it on the head.

Based on a true story, the fable follows Cassie Stark (Leah Hand) as she navigates the perils of being a “Northerner” in London. She laments about dating apps, mad-cap landladies and drinking Greene King Prosecco by the bucket. Her life takes a 180 when she meets the revoltingly charming Harley (Morgan Scriven). He shows her a life full of glamour, swanky hotels and sex doll selling. It’s Little Red Riding Hood on acid and goes just as successfully. Supported by Lewis Fraser and Rob Blowman multi rolling as love interests, waiters and shambolic policemen – without a doubt the show has a great cast. Despite having a slightly predictable plot, the heart is there, and it’s undeniably entertaining.

Hand is just brilliant. She makes Cassie so loveable; the audience feels the dread of watching your best mate fall into yet another awful relationship. You know it’s about to explode, but you’re crossing your fingers that, for once, it doesn’t. Accompanied by Morgan Scriven’s 90’s Hugh Grant character gone rouge, they’re a great team. Both show a fantastic range as their relationship launches from zero to a hundred.

A massive shoutout to Ellie Cansdale on the tech. The lighting and music choices were expertly made. Every transition was slick, the ball was never dropped, and some great storytelling was done with it. We transported through time and space with the flicker of a strobe. This attention to detail gave the show a professional edge which is often overlooked.

The show’s ending could do with a little finessing. It catapults into chaos, each actor shouting over another, making the last fifteen minutes of the play a little one note. Perhaps a little consideration of the alternative ways to build tension is needed and how each character could show rage individually. Deciding at what point the lid should fly off and when it’s more effective to have it on the cusp of bubbling over and being forced on can make or break a scene. But hey, that’s what Fringe is for. Trial and error, finding the nuance and working out the sticky bits. This show has great potential to soar and is a certified must-see.

Lively, entertaining and a great package of a show. If you’ve ever watched Tinder Swindler, this one’s for you.

Recommended Drink: It’s more Greene King Prosecco than your finest posh champagne. But I know which one I’d rather have!

Catch Doll at TheSpace on North Bridge – Fife Theatre, 13:35, until August 27th (not the 21st). Tickets are available through the EdFringe Box Office.