A Digital Pint with… Sam Nicoresti, Making a Joke Out Of Being Called Woke at EdFringe 2022 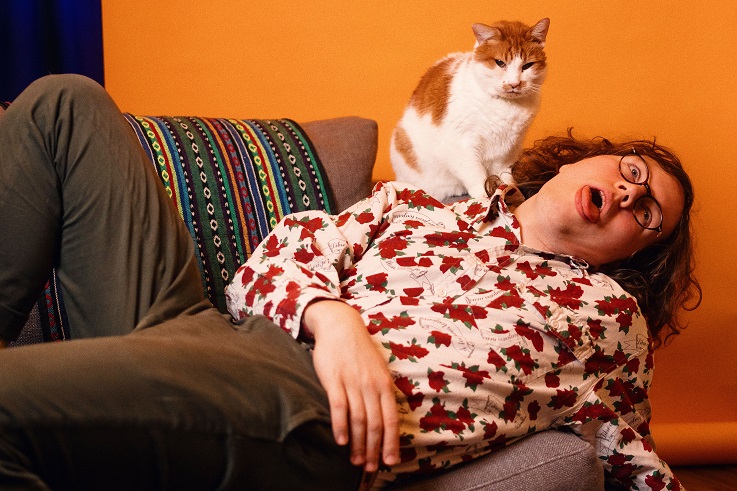 Sam Nicoresti has boldly declared that he has been cancelled, and as his EdFringe 2022 show description states, he’s being no-platformed on the biggest platform in the world. Taking a queer sideswipe at so-called “Cancel Culture”, we sat down for a pixelated pint with the man himself, and gave him a voice when nobody else would. You heard it here first folks, Binge Fringe Magazine is the world’s fiercest defender of the right to free speech… Whatever that means precisely.

Jake: Hey Sam, so ‘Wokeflake’ is a multimedia, comedic exploration of identity politics, the alt-right and gender. What can the audience expect from your multimedia experience?

Sam: Hey. Hard to say. If it were me, I’d probably expect some broad ideas explored colourfully with a couple of really silly moments breaking up the heavier stuff, dressed up in an increasingly ludicrous conceit that gives way to a moment of horror that then resolves into catharsis. But that’s only if I’d seen my stuff before. If I hadn’t, I’d probably expect an hour of stand-up about the culture wars.

Jake: How does it feel taking on these ‘culture war’ topics in comedy? Given how vitriolic the whole debate can feel, I would be somewhat daunted.

Sam: Totally! You and me both. There’s lots of conflicting interests at play, and I didn’t want to just write a show that made a bunch of easy broadsides against the stuff I don’t agree with whilst asserting my own credentials as a white hat. I tried to earnestly watch a lot of comedy I wouldn’t ordinarily engage with during the research period, but it ended up making me really ill and I had to take a step back. That’s when I started to be a lot more open with myself about why I was doing this show, and now it’s become a lot more about my own journey into queerness alongside this struggle with these quite harmful ideas and how I internalise them.

Jake: What’s your approach to taking on those big topics I mention? Is comedy, sarcasm, satire our best weapon in these debates?

Sam: The way culture-war debates are conducted reminds me a lot of arguing with flat-earthers. People come armed with a barrage of facts that are only familiar to them and their audience, neither side is ever going to concede any ground because they’re arguing fundamentally opposed world-views, and whoever owns the platform ultimately wins. It’s hard to see how you can weaponise against that, given it seems the format is the problem.

I believe in just trying to understand as much as you can to the best of your abilities; engaging with ideas you oppose should only make your arguments stronger. A lot of the comedy comes out of the moments where you realise what you are doing is stupid and ridiculous and that you are dumb and should stop and go to bed.

Sam: A shot of apple sourz… because I don’t know why I’ve done this to myself, but I’ve committed to it now and actually in the process of doing it I’m learning a lot about myself and my life choices.

Sam Nicoresti: Cancal Anti Wokeflake Snow Culture takes to the stage between August 6th and 28th, every day at 20:55 at PBH’s Free Fringe @ Banshee Labyrinth – Cinema Room. Tickets are not required in advance, however you can add it to your Fringe calendar here.