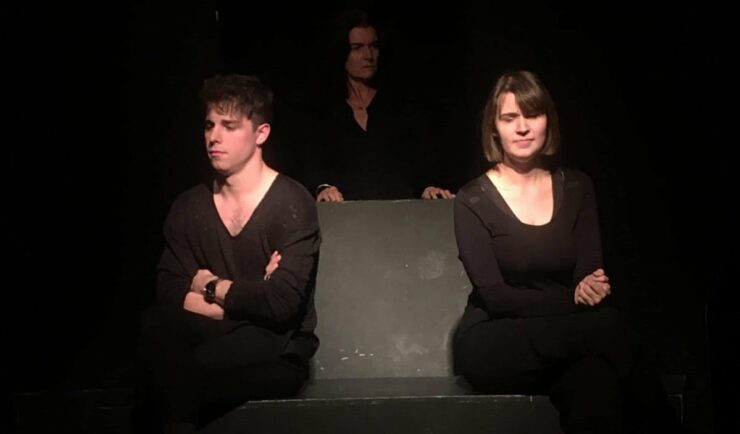 Trying is the odyssey of Annina Claesson’s Sinead and Ivan du Pontavice’s Ronan’s attempts at trying to get pregnant. We follow their journey over several months as they are resisted by medical bureaucracy and healthcare apps making promises and suggestions that just don’t seem to be helping. It is a story not just of pregnancy but also the strains that “trying” puts on a young relationship and the pressures and expectations put on the couple by family, friends and society.

The difficulties of starting a family are well replicated and presented by the two lead characters. Claesson leads the show in a performance that is interesting in the extents that it introspects the difficult psyche of Sinead as she faces constant hurdles and boundaries that she is unable to cross. Du Pontavice’s performance as the resiliently persistent, initially optimistic boyfriend is equally distinctive and the pair really do come across as a genuine young couple. Milly Unwin and Annina Claesson’s script sets out a clear aim of educating on the intricacies of fertility and documenting the troublesome consequences of a difficult pre-parenthood.

As an online performance, the show is presented entirely in a living room in the style of a straight play. While the format stays true to a Fringe experience (the audience could easily feel as though they are watching a play in a black box theatre), it occasionally feels as though the format move to an online performance hasn’t been entirely utilised.

The individual leading performances from Claesson and du Pontevice are refined and they handle the subject matter well. Supporting performances as various doctors and social workers from Louise Denyer are also often humorous but sometimes the changes in her character are too indistinct. A side effect of this however is that Denyer’s characters often appear as a wall of bureaucratic difficulty that Sinead and Ronan have to constantly battle with.

The show as a whole suffers from a slight lack of subtlety. All of the facts and tribulations are there but presented without a significant enough verve to fully engage the audience with them in their entirety. The cast should be commended for dealing with very emotional and difficult topics throughout this performance and it does truly feel as though we are guided on a pilgrimage through this landscape with the central characters. However, the show could do with a retooling in the way that it presents these ideas to ensure that it lands its message more clearly and to avoid the occasional feeling of flatness and superficiality that comes with the exaggerated performance style.

Trying gives it’s all to the intricacies it wants to transmit – the fashioning of this message could with reworking in order to ensure it maintains the level of engagement it needs to make sure that the truths it brings lands with its audiences. Smart, stirring and moving – Trying is one to watch in the future.

Trying’s performances at the Paris Fringe 2020 have now concluded.