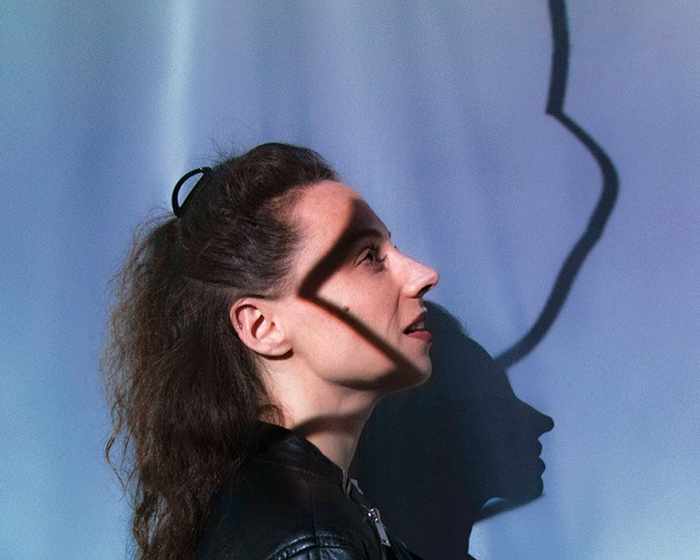 Zaatar Rain is straight to the point. The show has us questioning the concept of a border from the beginning. Inviting us to consider our bordered lives like a fishbowl and us the goldfish, living limited existences- and being defined through it. Maya Goldstein— writer and performer— has conceptualised a thought provoking piece that speaks to the divisive nature of a border. By placing herself as the sole performer, aided with bodiless voices—from voice actors; Maryam Hussain, Gill Reshef, Amro Saleh, Avihud Tidhar and Callum Tilbury— and animation drawn by Goldstein herself, we are invited to follow the journey of one woman’s attempt to cross the enemy lines between Israel and Lebanon. Goldstein’s solo presence on stage captured the solitary feeling of being kept apart from friends and family due to something as arbitrary as a geopolitical border. At the beginning Maya addresses the audience, animations portray her friend Luna—who she is attempting to see in Lebanon— even a huge Elon Musk face joins her on stage. But as the character’s hopelessness grows she is left alone and her imagination becomes her company.

A huge part of the show is set in a liminal space between Northern Israel and Lebanon. This really speaks to the theme of migration and borders, in this space the unquestionable concept of a border is brought to light. Impossible solutions like going to space, and becoming a sheep are comparable to crossing a simple border ‘legally’. These comparisons help us understand the frustration Goldstein feels with borders, it echoes her opening monologue which was punctuated with the sentence: “Anyway, I always hated borders”.

Everything in the play felt like it was done with careful and precise purpose, from the amazing animation, to the lights, music, and the performance. Furthermore, to balance out the conceptual topic, Goldstein’s performance is light, effervescent and captivating. The writing is sharp and at times, goofy (in the best way). Never before have I see the concept of borders and migration mixed in with an ABBA singing pigeon. It was an absolute testament to Goldstein’s crafty and intelligent writing. So as Maya wishes to do when she arrives in Beruit, I’d recommend watching this show with an arak, grapefruit, soda and ice cocktail.

This play is a must see, catch it at The Space Theatre in London from the 24th-27th of May 2022 in person or online 26th May-27th May. Tickets are available through The Space’s Box Office.

Based in London and obsessed with the Postcolonial world. Aditi likes to look at how theatre and comedy reflects today’s world of multiplicity. She’s keen to watch any kind of theatre or performance but comedy is her go to, because if you don’t laugh you’ll cry.