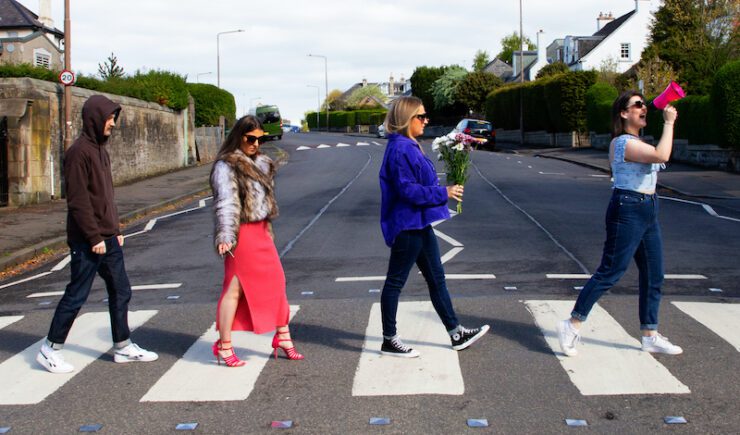 The company putting women’s stories centre-stage is back! After their sell-out smash hit pop punk manifesto Afterparty landed at EdFringe last year, F-Bomb Theatre have a new offering which tackles women’s safety, male violence and misogyny in the wake of a devastating crime. Alarmingly relevant and platforming unheard voices, we sat down for a pixelated pint with the team behind The Beatles Were a Boyband.

Jake: The response to your very defiant show Afterparty last year was electric – has that experience affected or empowered your process with creating The Beatles Were A Boyband? What can returning audience members anticipate?

Sally: “To sell-out and receive rave 4 and 5 star reviews on our debut show was something we didn’t anticipate. We’re back with a bang this year, in a bigger venue, with a brand new fantastically bold script. We’ll be tackling some consequential themes but audiences can still expect similar gutsy humour to Afterparty.”

Linzi: “We are so excited to be back this year – Afterparty lit a fire in us that we have definitely incorporated into this production. Returning audience members can expect to be as entertained as before but maybe even more affected.”

Rachel: “We didn’t expect Afterparty to be as successful as it was, especially as we were still students then. But it speaks to the demand for women’s theatre. Audiences can expect a little more maturity this year. F-Bomb has grown up and left school, but we’re still the same defiant team at heart.”

Kirsten: I think Afterparty will have a lasting effect on F-Bomb, being our debut. I think audiences should expect the laughter that comes with our performances but also keep at the forefront of their minds that this is theatre by women – we have A LOT to say!

Jake: You mention that your show this year tackles the topic while intercut with music, dark humour and uncomfortable truths. How has that process been for your team in developing the piece?

Kirsten: “I am so relieved to be back in the rehearsal room with the company and our director Aimee Shields. I actually got a little emotional during rehearsals recently, but in a good way! The script is brilliant – the themes can definitely be tough to approach but all the more reason we are doing so.”

Sally: “The rehearsal space has been an extremely open, creative and secure place for the cast and creative team to explore the themes in the script. As theatre spaces can often be male-led, it is extremely refreshing and important that women can share their own experiences, as well as delve into the more difficult themes freely and without fear of judgement.”

Linzi: “We are in a very fortunate situation to be working with a collective of women who take the themes and their portrayals seriously. The rehearsal space is full of reassurance and comfort, and I have loved every minute.”

Rachel: “We take violence against women very seriously, but a lot of the time in theatre it’s portrayed very graphically onstage, I would say needlessly. Even though we dip into dark humour, our priority is caring for our team and our audience.”

Jake: You’ve declared that your response to misogyny is unapologetically feminine, and that this piece is a love letter to women’s strength and spirit. Could you tell us a bit about how you’re aiming to portray femininity and why you feel it’s so important for your audience to understand it through that lens?

Sally: “The Beatles Were a Boyband really holds up a mirror to your own internalised misogyny and challenges you to question your beliefs and biases. The characters are well-rounded, believable and flawed and we hope that people will see bits of themselves, their sisters, cousins, colleagues, uni mates, etc. reflected in these characters and perhaps question how they treat those around them in everyday life.”

Rachel: “For me, I especially wanted to write about the basic girl who loves Starbucks, reality TV, horoscopes and Taylor Swift. She’s often the target of internalised misogyny, that everyone can make fun of without checking themselves. And we’re forcing you to take her seriously.”

Kirsten: “I think everyone portrays femininity in their own unique ways. My character, although does not scream “basic bitch”, definitely has some qualities – something I would probably say about myself too. I think it’s important for an audience to look through a lens that is recognisable to them.

Linzi: “The wonderful thing about femininity is that there’s no one definition – and that it truly is an individual thing. I think we explore three very different versions of it and that everyone will find something in someone that they relate to or understand. This is important because everyone deserves representation.”

Sally: “A scaled-back 2021 Fringe was a fantastic opportunity for us to make our debut as a company, but we are extremely excited to see the Edinburgh Fringe return to its full glory!”

Kirsten “For the laughs! Be prepared for a few one liners”

Linzi: “To spend time with these wonderful girls, telling this extremely important story.”

Jake: Fitting with the themes of our magazine, if your show was an alcoholic beverage what would it be?

Sally: “Pink Hooch – don’t knock it till you’ve tried it…”

Kirsten: “ A Long Island Iced Tea – it’s really got everything.”

You can catch The Beatles Were a Boyband this coming EdFringe at Gilded Balloon, Patter Hoose Big Yin, August 6th-13th. Tickets are available through the Gilded Balloon Box Office.