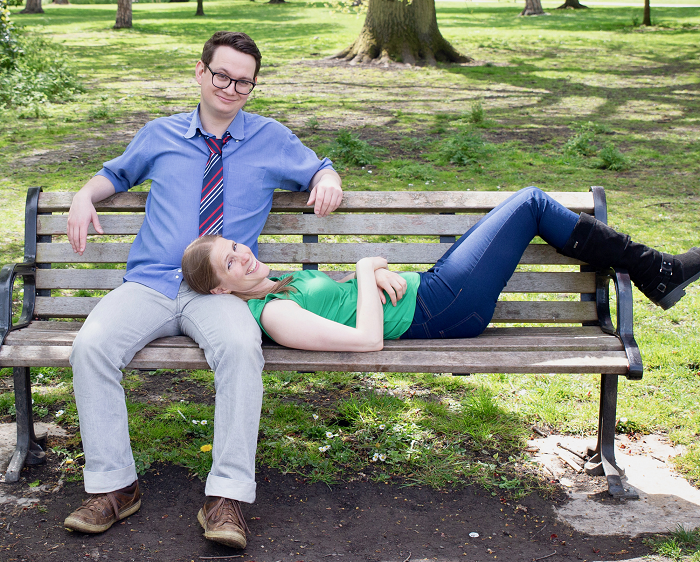 Welcome back to the Binge Fringe Public House for another digital pint! This week, we’re joined at the bar by Rachel E. Thorn and Alex Keen, a couple of Improv powerhouses delivering a couple of shows at this year’s Brighton Fringe in May this year. You pull up a stool, I’ll pour the pixelated pints, and let’s get stuck in.

Alex: Mates: The Improvised ’90s Sitcom is a love letter to the sitcoms we grew up watching in the ’90s, which now feel like a simpler time in all our lives.

Rachel: Like our favourite sitcoms, it’s a great chance to have a bunch of fun with big, zany characters and unexpected hijinks, but also show a little heart — right at the 22-minute mark! Creatively, it’s a thrilling challenge to capture that energy and juggle three characters’ stories.

Jake: …and how about Sex, Lies & Improvisation?

Alex:  Sex, Lies & Improvisation is more dark, more sexy. We love the irony of an audience knowing this huge lie that one of the characters is keeping, and the tension that comes from nobody (even us!) knowing when – or if – they will be found out. Working with anonymous real-life lies adds an extra thrill.

Rachel: If your ears perk up when you overhear an argument through the wall from next door, this is the show for you!

Jake: So how much ‘90s TV did you have to binge to get inspiration for ‘Mates’? How do you find that the references, which are central to ‘90s sitcom success, from those shows affect your creative process?

Alex: When we were creating Mates, we went back and watched a bunch of ’90s classics: Seinfeld, Frasier, The Fresh Prince, Home Improvement, and of course, Friends.

Naturally, we’re overflowing with nostalgia, but one of the things we love to do with audiences is get them to share their favourite things about the ’90s as well, whether that’s cordless phones, crop tops or Crystal Pepsi.

Then we get to weave those things into the show for that instant hit of recognition, and a reminder that the show is really made up on the spot from their suggestions.

Jake: And how have you found transferring the concept of ‘90s TV from screen to stage? What speed bumps have you hit that you didn’t expect?

Rachel: The sitcoms of the ’90s are fast-paced and really tightly written. One of the first challenges we faced when we started developing the show was in the scene changes: with a cast of three playing many more than three characters, we’re never off-stage for long and it can feel like a bit of a whirlwind! One thing we found useful was using our own names for our main characters, the three ‘mates’, then coming up with really colourful, memorable names for our ‘supporting cast’.

Jake: And does it work without a canned laugh track?

Alex: While canned laughter is a staple of that era, the best sitcoms were filmed in front of a live audience and you can see the actors responding to that energy in the show, just like we do in improv. But we haven’t done away with all the sound effects. One of our favourite homages to the genre is the riffs we use between each scene, which our co-star Hugh Clark actually wrote and recorded himself!

Jake: I feel as though Sex, Lies & Improvisation has a little bit of a motive behind it in discussing lying to those closest to us. Do you think you have a solid idea of why people lie? Do you think you might discover a different idea during the show?

Alex: Sex, Lies & Improvisation is about how we prevent ourselves from being truly intimate with one another. Portrayals of intimate relationships are rare in improv, so we wanted to bring something different to the artform.

One of the things we love about improv is that it can feel really intense and real, because nobody in the room knows what’s going to happen, which is a lot like those moments in a relationship when things go sour. Playing with intimacy and lies is a perfect way to bring that to the stage.

Rachel: I think people tell all kinds of lies, ranging from surprising to ridiculous to absolutely gut-wrenching.

We certainly didn’t set out with a particular message to share about how to do relationships right, but if we’ve learned any lessons from playing a pair of lying lovers, it’s that lies beget worse lies, and that in almost all cases, the dishonesty causes more hurt than the truth.

Jake: You say that in Sex, Lies & Improvisation the audience will get to choose an anonymous lie. How will this be decided? Will the audience get to input their own lies? If so, are you excited to be hearing juicy stories about lying?

Rachel: This was such a challenge when we came up with the show! We want to use genuine lies people have told, or secrets they’ve kept, but you can’t just ask people to shout out a lie they’ve told a partner in a crowded theatre.

Our solution is pretty simple: we have an anonymous submission form on our website, which goes straight into a database. At the top of the show, we ask the audience to shout out random numbers, then we pull out a handful of secrets and lies and read them out.

The audience then get to pick which one they want to see a show about, and which of us is being dishonest. Honestly, half the reason for creating the show was to hear all the brilliant gossip!

Jake: Have you performed at Brighton Fringe before?

Alex: You bet! Coming to Brighton Fringe is always one of the cornerstones of our national tours. Sex, Lies & Improvisation won Act Of The Year in 2019 in Brighton so we’re looking forward to bringing it back.

This will be our first year with Mates, and we can’t wait to share it with Brighton audiences, who are always so full of energy!

Jake: And where can we catch the shows?

Mates is at Komedia on Saturday 21st May at 1:30pm and Sunday 22nd May at 3pm. Tickets are available through the Brighton Fringe Box Office.

Sex, Lies & Improvisation is at Rialto Theatre on Friday 20th May and Saturday 21st May at 9:30pm. Tickets are available through the Brighton Fringe Box Office.

A Digital Pint with… Benjamin Alborough, making an Absolute Monopoly at EdFringe 2022