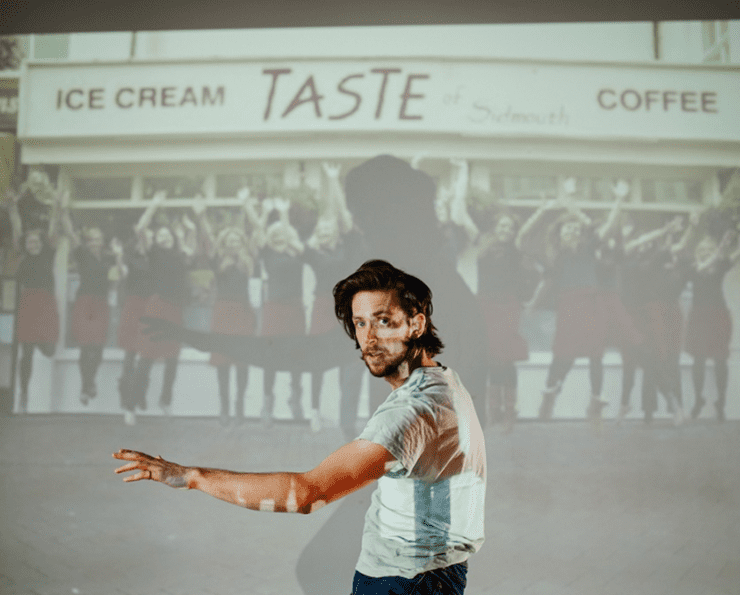 Join me for a Digital Pint with Lewys Holt, whose show Phrases will be signalling it’s way through to Brighton Fringe and Greater Manchester Fringe this year. Lewys is taking on everyday phrases with his dance, spoken word and multimedia performance that answers the age old question… What does the doctor do if you don’t eat an apple a day?

Jake: So Lewys, your show mixes together language, communication and dance. I was wondering what links all of those things together for you?

Lewys: Well, I suppose there’s kind of something in dance which can kind of communicate things that language can’t. Emotive textures or kind of things that happen between words or between feelings or between states. And there’s also things that dance can’t do, that words can. When I first started studying dance I thought that there can be a difficulty to understand what we’re being shown.

People often say stuff like, “I don’t get dance”, and I think that’s completely understandable because they’re not saying anything directly to you when they’re dancing. I think what this show tries to do is switch back and forth. I want to switch back and forth between a kind of more personable way of speaking to the audience, to share something a bit more tangible and then to completely fly off the handle and start being really weird and dancing and kind of flailing around the space.

That allows me to start filling in these gaps between the words and between the concepts I might have expressed with words and stuff. Does that make sense?

Jake: And how did you come up with this show concept discussing the immutability of language?

Lewys: I’m not sure about a single event, but I just started playing around with this projector, and I mixed it in with stream of consciousness writing, and then I split that up into little phrases. They were popping up on the projector behind me as I was moving. It was kind of an attempt to have both things exist in space at the same time and be able to be digested by the audience.

The stream of consciousness stuff was all just kind of like navel gazing questions about what does it feel like when I’m hungry? How do I even eat? What is my mouth? While that’s going on, I’m moving in the space alongside it or trying to leave space for it. It’s a kind of improvisation plaything. Then that sent me into trying to do some speaking improvisation, and I landed on doing lots of these catchphrases – everyday phrases. I started expanding them to see where they would go. So the one that’s the kind of crux of the show is this apple a day keeps the doctor away.

What happens if I don’t eat an apple a day? Is the doctor going to come and get me? So then I have to hide from him and just keep eating apples. Then it develops – how do I manage to spread one apple out over three meals in each day? Because I know I need three meals. Are there different ways of serving the apple? I start leading this character into a place of being locked in the house, hiding, eating only one apple a day. They followed this catchphrase and they ended up in a really bad position. That basically came out of a naive trust in these common sense catchphrases.

Jake: You say that the show offers “solidarity with the anxious, confused and those who overthink”, what can the audience expect from that element of the show?

Lewys: I think they can expect to see a man kind of struggle in a kind of a pathetic, but kind of humorous, sort of endearing way, struggling with just dealing with basic concepts. He’s struggling with the physicality of the show. That’s a bit towards the end where I’m just doing these repeated movements which morphed from one position to another, but there’s a real strain involved in it. So it really evokes this sense of going over things, procrastinating, having to go back over it again and getting frustrated. It’s about getting stuck, getting caught in loops in your head. So there’s this more narrative element of this person struggling, and then there’s also a kind of physical dimension to that as well.

Jake: What can people kind of expect to see in the multimedia elements of the show? I know you talked about there being a kind of projector. How does that link directly with this state of anxiety and overthinking?

Lewys: I’ve got the laptop on stage with me and that’s linked to the sound system and the projector and people are basically seeing me deal with my MacBook desktop in real time. They’re watching me scroll my mouse across, click on the search bar, find the files for the next bit of the show. And all the files have got these names of like, “What am I even doing?”.

There are plenty of little hidden elements inside the computer, which are being made big in front of everyone’s faces. That’s the main multimedia element, and there’s small moments of performance which are just all mouse work, all typing work. The timing by which I type a word out will lead to different audiences reading it in different ways.

Jake: It sounds like it’s been quite a playful process with the kind of mediums that you’re using. How have you found that? I know the show is overwhelmingly quite anxious, but is there a kind of fun in that for the audience, for you as a performer?

Lewys: Yeah, definitely. It’s definitely got quite a bit of fun in it. I think also just the levels of pathetic that we’re watching this person go through are so ridiculous that you can’t help but laugh. And yet this playfulness with the screen is going on as well.

There’s also a few elements of audience interaction where I basically ask the audience to provide me with the different names of different apples and I’m trying to get more and more Apple types out of them. People have often been very playful with that. When they start to say Cox you know that they’re having fun.

Jake: Have you been to Brighton Fringe before? Are you excited more about it?

Lewys: I’ve never done the fringe, but I did do Phrases at the Old Market in 2019. There’s a collection of dancers called Swallows Feet. They’re from Brighton and they ran a festival at the Old Market, and I came down to do it there and it went really well. I’m looking forward to coming back.

Jake: This one kind of links a little bit more in with our magazines theme, but if you could describe your show as an alcoholic beverage or maybe the one for an audience member to bring along, what would you say?

Jake: Wonderful! That’s an exciting image, actually. I quite like that. That’s got some quite nice subtext to it. The obscure, scrumpy-ness of it all. I like that. Thanks for joining me for a Digital Pint Lewys!

Lewys: Thanks for having me!