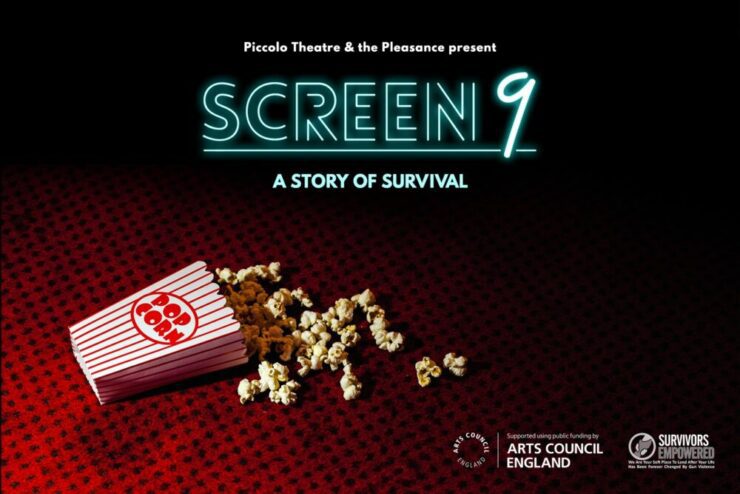 Screen 9 is a visceral, immersive theatrical experience which dives into the very heart of the experiences of survivors of the 2012 Aurora, Colorado shooting. On entering the theatre you are greeted by the smell of popcorn – something that later on becomes especially prominent and disturbing – and invited to help yourself to bags of the snack left next to a machine on the side of the stage.

From the moment you enter the space, it’s clear that Piccolo Theatre are hoping to evoke all of the senses in this production. This is a theme that continues, as later there is use of complete darkness and haze within the performance. As the show opens, four actors gradually emerge onto the stage and begin telling their stores in monologual fragments. As a piece of verbatim theatre, the rawness of every word is absolutely resonant.

Going in, I had questions about how well Piccolo would manage to handle the sensitivity and tastefulness of the content they’re dealing with. In some ways verbatim is the only way of presenting this completely tastefully, and the point in which Screen 9 brings you into the story moments of the screening on that night is filled with limitless tension and evokes a lot of sympathy.

Coming out into the audience, the sheer terror of the situation is laid out bare in front of you. It is a very disembodying experience, as you watch the clock on the screen tick through the time in which the events happened. Performances from each of the four here are especially strong, and after reaching a point of climax the show shifts to a point of contemplation very quickly.

The stories are devastating and credit is due to the actors for their remarkable performances. Each of their traumatic histories are slowly revealed in a way which makes you care for them without viewing them simply as victims. They are whole people. Kate Barton’s direction shines here, as this is due to the excellent story moments which are memorable and defined.

It is a truly devastating show, leaving you in a state of horror throughout and with an emphasis on the stories of the survivors. The decision to include a discussion about gun control laws is a provocative one that eventually ends on a point of reconciliation rather than conclusion. In seeking to represent diverse opinions and the complicated debate, the show’s creators should be congratulated.

Screen 9 shifts the focus to the tales of the survivors, grabbing you by all of your senses to make itself heard. It is an impossibly brave retelling done with verve and passion.

Be sure to catch Screen 9 at the Lomond Theatre, Pleasance at EICC, until August 22nd and then again between August 24th and 29th. Tickets are available through the EdFringe Box Office.