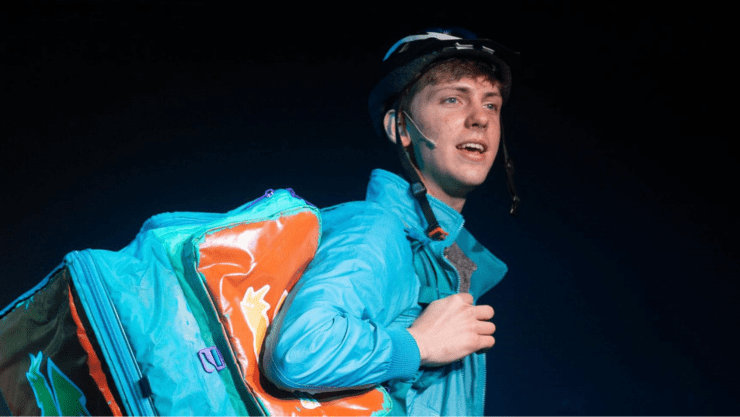 The plight of so-called “gig economy” workers has been played out quite publicly over the past few years in the media consciousness. From the D*liveroo rider strikes to the Ub*r driver court cases, this muddy territory of workers’ rights is of particular salience right now. On Your Bike, a musical from Cambridge University Music Society, does it’s best to show the humanistic element of these stories. It dives right into the heart of the issues; discussing debt, the lack of sick pay, corporate greed and of course, the lack of benches. However, it does so with a register of optimism and wit that keeps the audience ticking. It also has a kick-ass soundtrack to boot.

Gemma and Aidan are both new “Eatsaroo” riders, rocking up for their first day on the job. Aidan is an aspiring illustrator, using the gig as a way to fund his passion. Gemma left home young and is simply trying to pay her way out of the debts she’s taken on to support her independent lifestyle. It seems like they might be heading down a romantic path together until the arrival of Daisy, Eatsaroo’s PR busybody, who tries to whisk Aidan down the path of a corporate lifestyle.

An entertaining and well-developed B plot comes in with the character of Felicity. She is a struggling chicken shop owner whom Gemma and Aidan frequent with their deliveries, forced to take on the faceless corporation of KFK through any means possible – even if it means a brand new start for her and her family’s shop. Her performance brings a lot of comic relief throughout, but also comes from a place of heart that makes her character more than one note.

On Your Bike is so sleekly put together that you’d be forgiven for thinking this was a show on it’s fifteenth tour, not it’s debut. Some entertaining use of props to create a bike go down a treat with an audience, and this physicality is kept up throughout with some pacy dance numbers to match the stellar music.

The musical range on offer here is spectacular – we go from soul, rap all the way up to traditional showtunes. This is matched with a hearty ethos and double dose of enthusiasm from the cast, who embody each song as a genuine story moment and prove themselves to be among Fringe excellence. The vocal performances are all around excellent, although special commendations go to the actors playing Gemma and Daisy. They show a vocal range that is truly hair-raising and left some audiences agape throughout.

Ben James’ and Joe Venable’s script is fine-tuned to the point of perfection. There is not a moment wasted on stage and each line reveals something new about the characters which we then see addressed and reconciled within the fifty minute run time. The one-liners are cracking. The storyline is condensed just to the right amount that it leaves you wanting more but that you also feel greatly satisfied by the performance.

One criticism I had heard about the show beforehand was that it comes just short of implementing a revolutionary agenda, leaving us on a cliffhanger about a potential resolution to the woes these riders face. To address this, my personal feeling is that the show does a good job of portraying the current circumstances that gig economy workers face – an air of uncertainty about the future.

While James and Venable had the potential opportunity to imagine a future where these problems were resolved, instead they chose to reinforce the reality of the current situation as a more poignant message. I am an ex-D*liveroo rider myself and while I’d love a revolutionary manifesto against the corporate greed I, and others, experienced – the truth is we just can’t have one!

There is more nuance here than meets the eye, as gig economy riders do enjoy a limited extent of flexibility in their position which not everyone in the industry wants to lose. Similarly, they are deserving of the same rights as any other worker on a minimum wage job. Where do these ideas cross? Perfectly at the centre that Cambridge University Musical Theatre Society find in the message of On Your Bike.

Semantics and musing aside, this show is a stunning achievement. Raucously witty to it’s core and heartfelt at it’s best. The music is a triumph and the story is deeply emotionally intelligent. This show will be an EdFringe tour de force. It is some of the best that this year’s Fringe has to offer and deserves every wild success it gets.

Recommended Drink: Take a bin dive and see what you can find!

Catch On Your Bike before it cycles away on August 28th. You can watch it at the Bevan Theatre, theSpace @ Surgeons Hall at 17.25 each day until then. Tickets are available through the EdFringe Box Office.