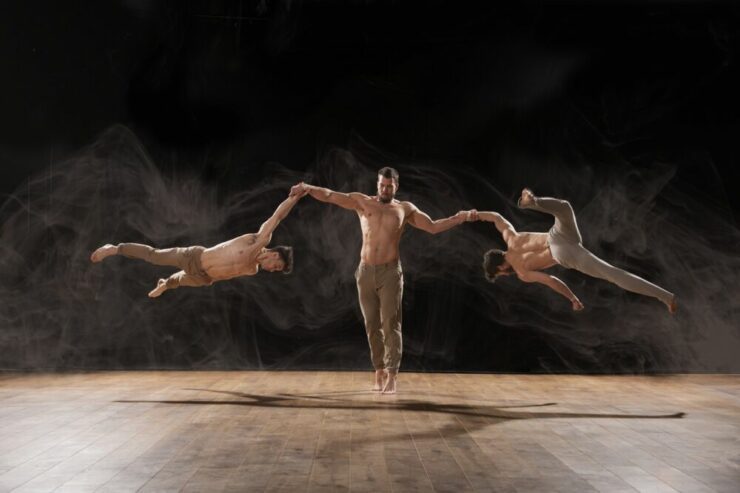 Bromance bills itself as subverting conventional circus tricks and styles with playful techniques. There is no doubt that they are successful in this aim, as this is some of the more avant garde circus performance/physical theatre I’ve been lucky enough to see at the Fringe.

What was on offer was essentially a buffet of increasingly impressive, interesting and entertaining tricks which imply and impress plenty of meaning on the audience. Going in knowing the name of the piece “Bromance”, most audience members will begin to draw an instant correlation between the themes of masculinity, friendship and social interaction.

The piece opens with a section regarding handshakes, with an audio overlay describing the social implications of a limp, firm or two handed shake. This is neatly matched by the energy of the performers (in my case – Raf, Luke and Eric, although the cast is on rotation) who compound dance-like movement on top. This theme progresses throughout the play into full-on acrobatics, which are immediately exciting. The focus on the handshake is interesting given we are living in COVID times, although it slowly feels that we lose focus on this as the show progresses.

Particularly, the sections in which Raf was suspended in a large hoop were visually striking and left the audience in a tense state of anticipation. The final three-high piggyback section is also an absolute nailbiter. If I’m honest, the show’s ticket price is worth it for these tricks alone. I do feel however that by the time we reach the hoop, the interactivity between the three performers lessens.

Prior to Raf suspending himself in the hoop, there was a long and very active section in which the performers are in continual contact – testing each other’s trust and fooling with the audience about drops and injuries. This is fantastic clown work and the occasional inclusion of hand sanitiser into the mix reinforced the pandemic imagery that the play opened up on. This is slightly lost during the aforementioned sections, and then brought back towards the end during a scene in which the three are tightly packed on a seat.

The tricks were peppered in between what can loosely be defined as atmosphere-building sections. Often these consisted of the trio making slightly awkward jokes and sometimes sniffing each other’s armpits. Subverting tradition? Certainly! Initially I was quite keen on the idea and it had a lot of humour, but as the show continued on these sections grew to be a little tiresome. Despite this, it’s hardly as though I could expect three people to be doing acrobatics for an hour straight – I just wonder how much of this time was used to it’s maximum potential?

One absolutely critical flaw of Bromance is the staging. Taking place in a traditional Fringe “Spiegeltent”, the seating is ever so slightly raked. Unfortunately despite the raking, many (sometimes quite long) sections of the show take place low to the ground. This led to a bit of a domino effect where the audience were craning their necks, or worse, standing up and moving about in order to get a proper view.

People either side of me were complaining throughout about not being able to see properly during the show and I have to agree with them – unless you’re up close it was sometimes a struggle. If it were to have taken place in a venue with higher raked seating or a raised stage then this wouldn’t have been an issue. Unfortunately, I do have to include this as part of my consideration as I can only consider the show ‘in situe’, as it were.

Bromance is a buffet of tricks that plenty of people will enjoy. Sometimes it feels as though the conceptualisation and imagery isn’t entirely thought through, but it’s enjoyable nonetheless. If you’re going to see it at EdFringe 2021, make sure you get there in time to get a front row seat. Other venues may vary.

Recommended Drink: Whatever these three lads are having that makes them able to jump on each other’s shoulders. But that probably requires a trip to the gym, at your own risk.