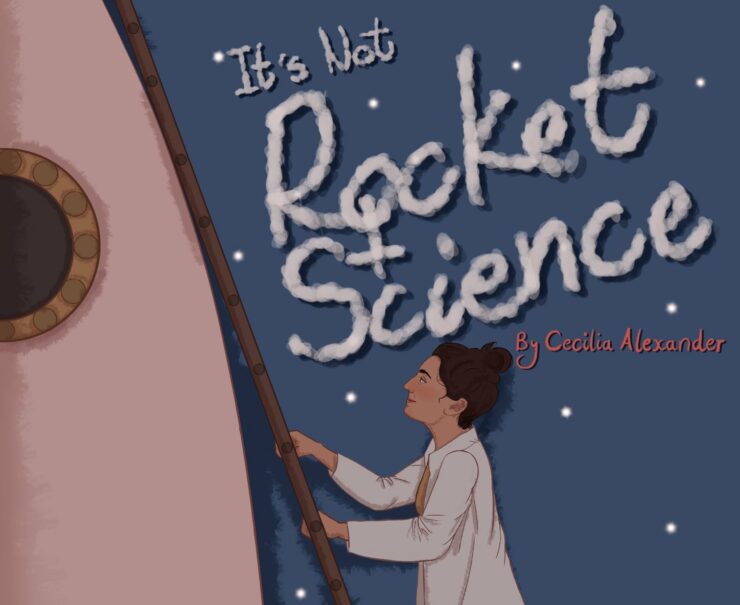 Ready for lift off? Science, feminism, philosophy and social commentary collide in It’s Not Rocket Science in all the right doses. Eve begins as a young girl with a dream to become an aerospace engineer. Her journey leads her through school, academic life and into the male-dominated industry on which she set her sights. The challenges she faces are many, and she always has to use her defiance, skill and sense of righteousness to have her voice heard.

Her parents are more than willing to hear about her ambitions, even if her mother is concerned as to why she’s strapping rockets to her Barbie dolls. But in truth, it takes a powerful monologue by an adult Eve for her parents to truly understand that her rise into science is one set back by entrenched and unmoving systemic pillars. As we see her reach her university years, Eve learns that even those she idolises (regardless of their gender) are a part of the system pushing back against her.

Eventually, we see her defy those at the very top of her industry, including a misogynistic astronaut whom she once admired greatly, to become an engineering success and helping make changes in the workplace as well as society more broadly. She breaks down the theatre in presenting oneself as a woman in a male dominated industry. She balances her work life with becoming a mother, nurturing her child’s spirit and standing up for what she knows – that she is talented, powerful and that she can use that power to make change in the world.

It’s Not Rocket Science is foremostly a play about equality and opportunity. However, the show creators have clearly done their homework. They have managed to build a performance which intertwines a genuine interest in science and engineering with that central and important message. This is the key to what makes an excellent Fringe production – that at the core there is genuine passion and motivation to tell a story. Here, it is expressed through an excellent quality of performance.

The central performance of Eve is crafted with charm and ingenuity. Her pride, defiance and self-assurance is undoubtable from the moment she steps on stage. The actor has immense skill in maintaining a continuing essence which follows Eve through her story across her entire lifetime. Her frustration and bodily expression is never whining, never defeated and these are central aspects that make It’s Not Rocket Science a success.

As a three hander, Eve’s character is joined continuously by different characters. The two actors multi-roling show immense talent and versatility. Despite being younger actors and playing older characters, they do not fall into the trap of characterising these roles by age. For example, in performing the Mother there is an acute tenderness matched with caring mannerisms while Dr. Howler, of the same age group, is astute in body language and pitched lower in vocal tone. These are signs of the attention to detail which have gone into creating these different performances and maintaining their separation.

The show is cut neatly into different chapters. This format is unique and works well in compartmentalising different story elements. Some chapters act as handy containers for the aspects of oppression and inequality which the show creators are presenting. While one chapter deals with sexual harassment, another deals with family-work balance. It creates a unity in the narrative while still portraying clearly all elements of Eve’s experience.

This is complimented well by the balance achieved between story and message. While I won’t try to break down every element of the message here (you can support the cast and go and see the show if you want that), It’s Not Rocket Science avoids being preachy and genuinely makes the audience reconsider their unconscious biases through meaningful and deconstructive storytelling. At one point, a male student makes a crass joke which is then pulled apart by Eve and fellow student Anna. It was interesting to hear some laughter in the audience initially at the joke, met with sincere contemplation after it was pulled apart.

This is the kind of show that changes opinions and breaks boundaries open. In devising the show, the show creators remark it is derived from interviews with 20 female aerospace professionals. Cecilia Alexander’s verbatim script is powerful and nuanced. The interviews are utilised well as compelling sections of their audio are played during the incidental music. Their statement that “Eve is an amalgamation of all those we’ve interviewed and her story is all theirs” brings all the more authenticity to their production. Alongside this, little details such as the subtle playing of Frank Sinatra’s Fly Me To The Moon in a date scene and the naming of Eve’s own daughter show the passion in this project.

It’s Not Rocket Science is a demand for systemic change and real world action. It forces its audience to consciously consider their own biases while making them all the more aware of the realities of the experiences of women in engineering. Defiant, energetic and fun – it’s a show that will stay with you.

Catch It’s Not Rocket Science before it blasts off at the Bevan Theatre, TheSpace @ Surgeons Hall, August 19th, 21st, 24th, 26th and 28th. Tickets are available through the EdFringe Box Office.