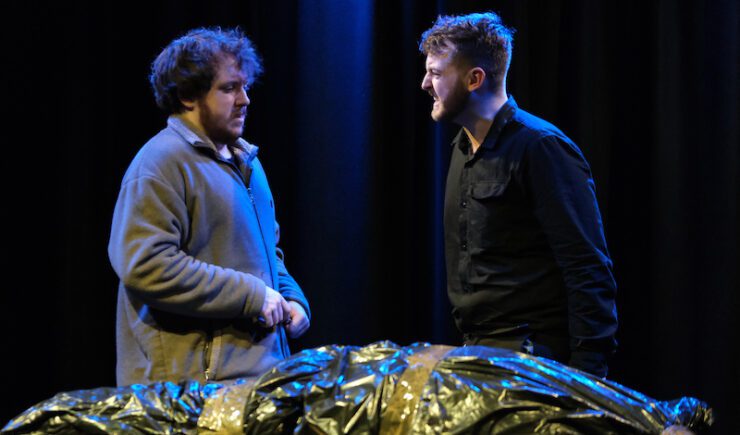 Where did all those bodies come from? Corpsing kicks off in true dark humour style – a wily undertaker’s assistant dragging a binbag-clad corpse across the stage. We learn that this is Charlie and he’s been in the business of death for a while now. He’s soon joined by the uptight business grad Elliot, who’s just inherited the family funeral directors and upped sticks from cosmopolitan London to sleepy coastal Greenock.

What plays out is a farcical, whimsical and slightly unnerving story of fraud, assisted suicide and Frubes. Yes, the yogurt snack for kids. When the auditor Fiona arrives to check over the company accounts, it becomes clear that Elliot has inherited far more than just the family business. Things get sticky quick – but I won’t ruin anything for you!

Corpsing is a fantastic production. It comes off as remarkably sleek and well-rehearsed. Elliot is a whiny, unlikeable but entirely believable central character who is in way out of his depth. The performance of Charlie as the grizzly, ungroomed assistant is a great play off and the two are a delight to watch. Fiona, the auditor, is an instantly grating, overly cordial busybody. I’m sure anyone who has worked in an office knows someone just like her.

None of the characters are particularly likeable, and yet the actors give us plenty to care about throughout the show. Beneath the laughs is a genuine moral question which the show creators have used to unearth (pardon the pun) some excellent gallows humour. Productions which throw the question of assisted suicide into the mix usually end up being dry and face the risk of being po-faced. However, Corpsing turns the audience on it’s head. Why are we so squeamish about the word death?

Of course, at the heart of the show is some great physical comedy and a slurry of hilarious moments. One of the show’s few drawbacks is that the staging can make it quite difficult for every aspect of the physical comedy to be revealed. Particularly those sat at the back may miss out, as the bodies spend much of their time on the floor or low tables.

This is made up for by the quality of the show’s production aspects. Even with a limited lighting rig, a different atmosphere is created for the shows two primary locations. The set pieces are solid, the props hilariously put together and the incidental music is funky and keeps the hefty scene changes in balance with the show’s energy.

There’s a lot to like about Corpsing. It’s a romp, a fantastical comedy with interesting social commentary at it’s core. This is pure Fringe and I’m here for it.

Reccommended Drink: Grab yourself a nicely aged wine, just make sure the seal is tightly on.