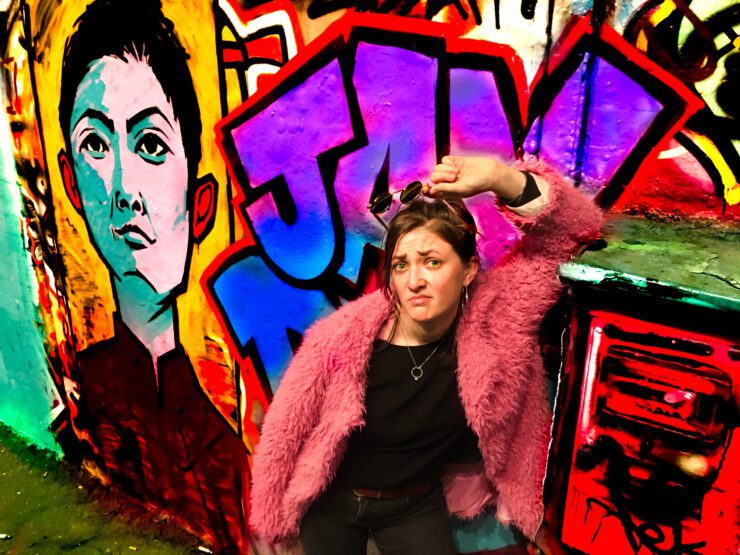 Carrying an entire show’s presence with one actor and one character is always an extraordinary feat. The success of one-actor shows often tends to be the authenticity that this actor brings (as they tend to also be the one behind the show’s content) to the performance. Clementine Bogg-Hargroves’ Skank is a true expression of this style of performance and her short but sweet online Paris Fringe 2020 offering is an excellent narrative effort.

One of my biggest gripes with performances at Fringe Festivals is the desire to over-extend shows which could be a lot shorter, granted this can be an element required by programming. Paris Fringe 2020’s online format has offered finally the chance for performers to use time at their leisure and Skank plays out its circular narrative in under ten minutes – not needing a second longer to evidence her character.

The central character, performed by Bogg-Hargroves, is relentlessly forthcoming with her thoughts and feelings to the other off-screen characters, played out by her brutally honest language, over the top costume and tacitly elastic bodily expression. If it were the late 2000s, I’d describe the show as ‘gritty’, but this is a played out trope – Skank‘s grittiness is a mask for a vicious satire of all our boredom and self-pitying played out throughout this lockdown.

In one section, she is tagged in an Instagram walking challenge by “hot Gary” and falls into the delusion of thinking that she could find Gary out on his walk and seduce him. Who can say honestly that we haven’t fallen into complete disillusionment with these rules and regulations and just wanted to flout it all in favour of a moment of instant satisfaction? She struggles with a female relative unable to properly work a Zoom call and a distressing piece of personal news arriving at the time where we all have to stay inside and internalise our problems.

While these moments could have easily seemed overplayed, as there’s no doubt we are expecting an overload of shows born from these months of isolation, Skank jumps in at just the right moment to point a finger through the screen. The show also ran the risk of appearing po-faced, but the performance luckily averts this in favour of a relatable character performance supported by a grainy, dry universe cleverly crafted.

All that the team behind Skank must be careful of is to ensure that this universe and character is truly derived from and not defined by its inspirations. There is a clear nod in both marketing and performance to Fleabag, a reference to which the creatives behind the show needn’t use, as the character clearly shows the promise to stand on her own two feet.

Wildly funny, powerfully abrasive and with bags of potential – the next capers that Skank wraps herself up in should not be missed. You can keep up with future performances through the show’s dedicated Facebook and Instagram pages.