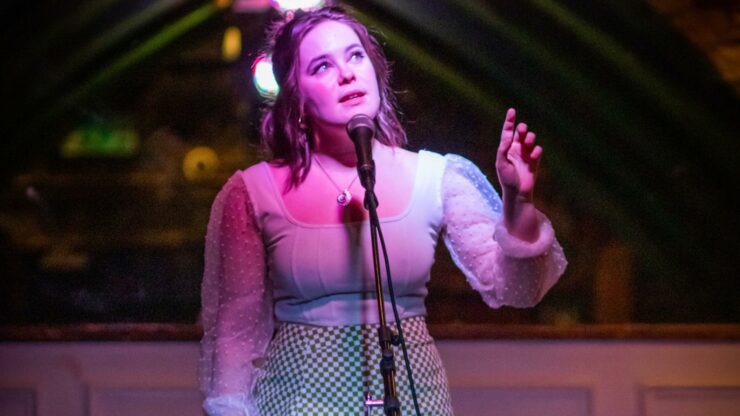 Today we’re joined by Jas Nisic, for a virtual pint to discuss her upcoming show We Need To Talk, a Jazz Cabaret, landing at VAULT Festival at the end of January. Nisic’s show will explore the journey of a queer breakup with a raw and honest lens, and of course… Plenty of Jazz! A kind of Jazz Jukebox Cabaret, Jas will perform songs by Ella Fitzgerald, Etta James, Nina Simone and many more. We sat down with Jas to talk all things jazz, queerness, breakups and Espresso Martinis. Check it out.

Hey Jas! So you’ve taken the concept of a breakup and turned it into a queer, jazz cabaret – how was that presumably quite personal and intimate process for you?

“It felt quite empowering because I don’t ever take myself too seriously. I deal with most trauma in my life with a bit of humour and comedy. I use the show as a reminder to myself that I am worthy, I am enough, and that I don’t need to be in a relationship to be whole, and if that resonates with someone in the audience then that’s even better. I’ve picked songs that fit with my narrative, some well-known, some more obscure; I want people to have a really good time, have a laugh and leave knowing that they are pretty amazing as they are!”

We Need To Talk has an emphasis on the role of technology in forming and breaking relationships, how did that come into it and how does it reflect on the version of the show you’re bringing to VAULT 23?

“Dating apps have completely taken over the dating game, people often have the opportunity to reinvent themselves and portray a shiny perfect version of themselves through photos and a short bio. I have used dating apps to boost my ego, the more people who find your attractive and objectify you makes you feel better right? Definitely not, hindsight is a beautiful thing.”

“Social media has also played a part in which we document and showcase our lives to the world, often projecting a false reality. We aim to share a version of ourselves that looks like we are bossing life; airbrushing away the cracks and bumps that make who we are. I’m sure many people (myself included) have stalked ex partners, ex partners new love interests, ex partners parents on social media, it’s addictive, it’s like you’re spying in on somebody’s life – and this wasn’t possible before social media. We can value online praise and attention more than real life, the number of likes on a photo, views on a reel, views on a story, how many fire emojis will this raunchy picture get?”

“These themes are woven into the story, how we use technology to self soothe but also sabotage. Ever left an embarrassing voicemail? You can’t unsend those.”

What kind of influences did you have in creating the jazz elements of the show? What can the audience look forward to there?

“I am a Musical Theatre graduate and I fell in love with how old Musical Theatre songs were adopted and brought back to life by jazz artists, one of the songs in the show is Love Me or Leave Me originates from a Broadway musical comedy Whoopee! and Nina Simone’s version captures the same story of the song but jazzed up the gods! You’ll hear songs made famous by Ella Fitzgerald (my personal all-time favourite artist), Eva Cassidy, Etta James, Nina Simone and Judy Garland.”

“I can’t wait to meet the audience; the show is very interactive, and I can’t wait to hear their response and play with them. I love to have conversations with audience members, no night will ever be the same as I feed from the reaction of the audience.”

Tell us a little bit about the queer element of the show, and how your own queerness has affected it.

“Since accepting my queerness I have found a supportive family, and have found the people I finally click with. Most of the songs in the show are written with a gender in mind such as “I’ve got my man, who could ask for anything more”, but as someone who falls in love with any gender I wanted to incorporate that into the show, so that everyone in the audience can relate, because anyone can be heartbreakers, anyone can fall in love. I wanted to challenge people’s bias on they/them pronouns, they have the same number of syllables as she/her and he/him so musically it’s sound. But I want people to sit with their discomfort and think to themselves, does it really matter? Many artists switch the gender of a song, Eva Cassidy sings “Ain’t no sunshine when he’s gone”.

I would say it would be an Espresso Martini with the vodka switched for a dark spiced rum with a big ol’ flaming candle on the top. The show will keep you on your toes, and most certainly wake you up, it has moments of vulnerability but lots of fun.