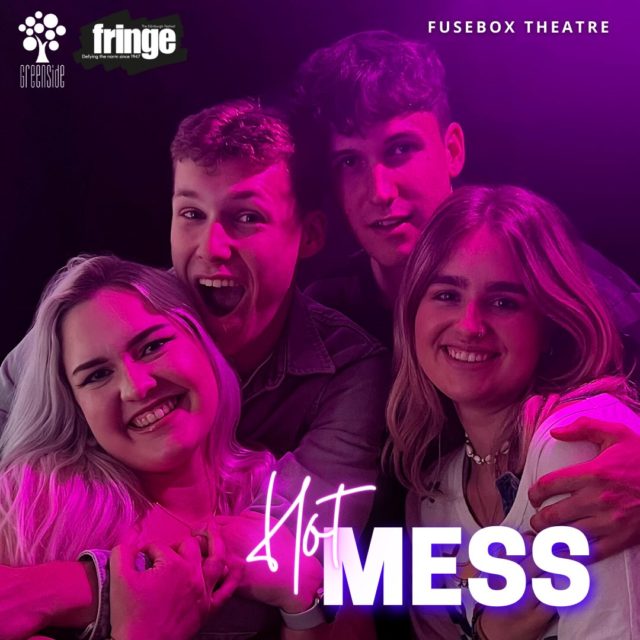 Hot Mess traces the lives of twins Polo and Twitch, who at birth only had one heart between them. Ignoring the point that a heart coming out of a womb moments after two twins is scientifically insane, the Doctor is left with a choice of who to save. The show makes continual reference back to biology throughout the piece, as we meet Polo and Twitch on their shared 25th birthday to recount the past few years of their lives in light of Polo’s departure from their home in the Solent to London.

Twitch is a young, seemingly carefree hippie who has stayed at home, presumably based on Hayling Island, just a couple of miles away from where I grew up. She casts an odd contrast to the rest of the island, who appear far more concerned with gossip and drama. This sense is embodied in the character of Jax, their hairdresser mutual friend. Jax and Twitch are both having sex with mutual friend Billy, but neither knows until the climax of the play reveals it.

Polo is a deeply inaccessible character. He is withdrawn from the life of the Island and family, especially with Twitch. They reunite to go on one big night out in town and Polo watches Twitch’s world fall apart as it is announced that Billy is leaving the island, and well… not very much else happens to be honest.

Let’s start bottom-up – and Binge Fringe is a place where we provide constructive criticism that is still entertaining to read, but there is a lot that it is important to discuss here. Hot Mess describes itself as a piece of physical theatre and I can safely say that this element of the show makes up less than 15% of the total runtime. The moments of physical theatre are understated. This is not necessarily a negative but given the elements of heavy drama that are happening around it, the physical part feels like an afterthought rather than a focus. I do not feel that this show can solidly sell itself as a physical theatre production.

Secondly, the show describes itself as a poetic production. I would agree there is a lot of poetry on display, but not an awful lot for the audience to actually connect with. There are issues with the characters which completely distance you from the meaning of the poetic form that some of the dialogue takes. Namely that they are caricatures of people who you feel no tension or connection with. The reactions of the characters appear so dramatically over-the-top compared to what is actually happening that you struggle to emotionally devote yourself to any of them.

The text on which Hot Mess is based originates in a 2014 play by Ella Hickson. I had not read this piece before seeing the show and if the script resembles anything like this production’s interpretation then I am puzzled as to why Fusebox Theatre would want to put on an adaptation of it. There are a number of things to discuss here, part of which are the responsibility of Hickson and part of which are that of this particular production;

Twitch, Jax and Polo are awfully written characters. It is immensely hard to believe that Twitch was written by a woman, even though she was. She is so completely absorbed by her dependency on the men in her life that it genuinely often comes across as a questionable representation of women. Speaking of Billy she says, out loud, at one point in the play “I want to be owned by him.” If Fleabag was an opportunity for women to reclaim heterosexual sexuality under a feminist lens, this script is the opposite. Throughout the piece, Twitch is shown as a child physically hurting men around her. This is never resolved. The impact on her is never explained.

Twitch is not the only woman who suffers in representation in this piece. Jax is completely absorbed by her need for sexual pleasure from men to the point that she says, out loud, of Billy – “You have to live with the realisation that the man you’re sleeping doesn’t think about you when he wanks.” Speaking of wanking, it is mentioned in the piece that Polo doesn’t wank. Billy finds it weird, then Twitch makes no effort to explain why it’s even remotely relevant. We don’t hear about it again.

The presentation of love in this piece is deeply confusing. Twitch is presented as being consumed by the need to fall in love and not have casual sex, yet she can only explain why she wants to lay next to a man after sex by explaining the hormonal makeup of biological males and females. What does this mean about Trans Women? What about women in the menopause who are experiencing hormonal fluctuations? This description is deeply problematic and underlines a bizarre scientific dogmatism which seeps through this play’s message. Womanhood and love are presented as some sort of chemical design rather than a human experience.

The intentions of the characters are so Upper Middle Class it leaves you asking – “Rah, where’s my empathy?”. I’m going to avoid the very obvious joke about the play’s title and just leave it there.

Want to see if you disagree? Catch Hot Mess at Greenside Infirmary Street – Olive Studio, at 20:55. Tickets are available through the EdFringe Box Office.

Correction: Removed reference to the ‘Bury Your Gays’ trope and miscommunicated plot point due to clarification from the company.