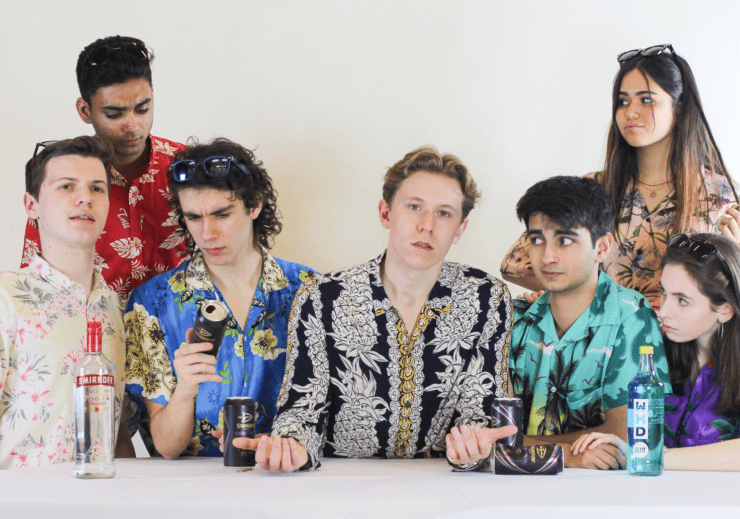 Is this what nostalgia feels like? Young people often hear their parents talk about Top of the Pops, obtuse hair styles and the constant threat of imminent nuclear destruction in a kind of whistful, far off manner. When you’re barely old enough to remember a left wing Labour government, what do you have to be nostalgic about?

Ball Pit Theatre’s The Last Sesh then. The whole affair feels eerily reminiscent of my Sixth Form experience. Five lads heading to the conclusion of their A-Levels plan a romp in a warm, chlamydia-soaked sun spot while reminiscing about the years they’ve spent embroiled in playground drama. This is mixed in with the turmoil of unresolved lumps of teenage beef. As a nineteen year old, I sit slap bang in the middle of The Last Sesh’s target audience and if there’s one word I could use to describe the whole experience then it would be that fatal cliché of “nostalgic”. Though the extent of this reminiscence extends to little more than a couple of years ago.he Last Sesh opens upon the toughest decision of any group of lad’s teenage lives – which Balearic moral cesspit do they want to galavant around for a week? Frankie’s brother has loads of great stories from his lads holiday – booze cruises, raunchy bar maids – all of which sound like bullshit. Alex is suffering from breakup fever and just wants everyone to make their minds up. Then enters Abbey – best friend to Alex’s ex, just to stir things up a little, and her friend Hannah.

It seems like Abbey’s got one of the other lads holidaymakers, Fraser, totally wrapped round her finger and the lads can’t bare to deal with it. Hilarity ensues as a cascading series of playground tittle tattles follows. Hannah falls for “Mr Magic Carpet” Max ahead of Frankie, whose been trying desperately to pull her. There’s Uni banter, Syria, Dad-bods and used condoms. Everything rises to an emotional end as the bantering turns darker and more sinister, and events from teenage past are inevitably dug up and laid out for everyone to see.

There’s a wonderful elasticity to the entire production. The unity of time, place and action makes the timeline of the events unravelling flow. It has a seriously funny and biting wit. Much like most of my own teenage interactions, every serious comment is met with a controversial comment or self-deprecating joke. In a world of Love Island and the Inbetweeners, the atmosphere of The Last Sesh fits perfectly.

Lad culture is something which many in the modern world see as something very oppressive and conforming. The Last Sesh attacks this idea very well and discusses it from numerous perspectives whilst still being able to feel light and not at all cumbersome.

Performances matter very much in this regard. A particular treat is in that of Tom Foreman’s Frankie. His delivery of lines both funny and serious is multifaceted and introspective. Frankie’s shallow facade slowly disintegrates over time and Foreman manages to portray this in a manner which is extraordinarily emotive. Undoubtedly a highlight is also in the performance of Ben Osland as Alex – a straight man deluxe model. Alex is almost always the butt of the joke and Osland demonstrates a frustration towards his friends and their on the whole indecisiveness through excellent mannerisms. He is on the whole, very believable.

The spitefulness of Abbey is presented in a Mean Girls vibe by Emilie Clark, who builds into a tense atmosphere and reflects this tenseness onto her relationship with Tom Pacitti’s Fraser. Relationships throughout the story are really true to life and the dialogue is rich with slang – something which in almost any other performance would come across as out of touch. But with The Last Sesh it feels almost verbatim, and this is very much an achievement.

Although The Last Sesh does what it ultimately sets out to do, sometimes the staging comes across as a little bit static. Perhaps that’s just because we now live in a bubble of high energy, in your face production value however for the majority of the play the characters are sat around chatting. While this creates a conversational tone, it can feel at points a little still. The majority of the jokes landed but some of the delivery of the dialogue came across a little awkward.

But all in all, this is clearly a show that the cast is very passionate about in terms of it’s humour and emotional value. A very witty look at lad culture that is bound to make a splash with a generation of young adults seeking a self-examination.

The Last Sesh will run until the 11th of August at TheSpace @ Surgeons Hall at 21:25pm. Tickets are available from the Fringe Box Office.

INTERVIEW: A Digital Pint with… ELOINA, betting with ‘HIGH STEAKS’ at VAULT Festival