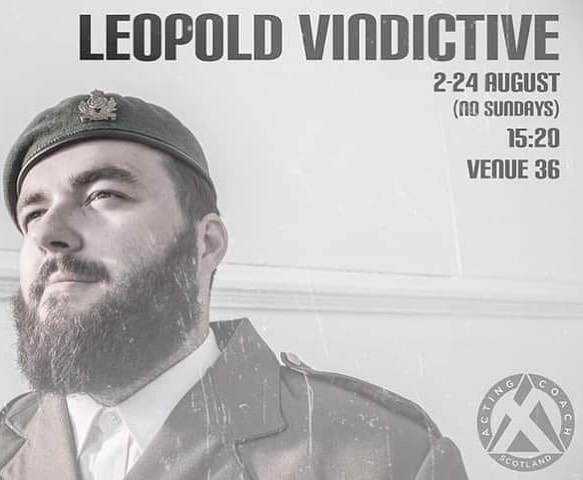 In 1940s Belgium, we’re privy to the lives of brave civilians who passed information to the British government through carrier pigeons. It’s a concept with a lot of scope and potential, however Acting Coach Scotland’s production of Leopold Vindictive by Cecile Durel is lacklustre in performance and only taps the surface in theme and style.

Officer Sanders has been assigned to MI14 – charged with retrieving intel from inside Nazi Germany for the advancement of Britain’s military campaign on the continent. Sanders is bewildered by the fact that his commanding officer wants to use homing pigeons as a method of getting civilians to leak information about the locations of key Nazi targets. By some stroke of luck, their plan works. They receive a letter attached to one of the pigeons from a mysterious group identifying themselves as “Leopold Vindictive”.

Switching to the Belgian side, we meet the brave civilians risking everything to regain the freedom to speak their own language and reclaim their country. Jozef Raskin, described by his comrades as a “funny priest”, Hector Zhoy – described as a man who likes to play spy and Arcene who is described as the social hub of the small Belgian village.

The narrative flips between the two groups as Leopold Vindictive begin to relay information about Nazi movements and look after the pigeon that is sent to them by MI14. Eventually it becomes evident they will be caught whilst Sanders and his superior desperately try everything to maintain contact with them. But alas, their fate was sealed from the beginning.

One core issue with this production stems from what I mentioned earlier – the characters are described a certain way and portrayed by the actors as nothing like that. Arcene, supposedly a sociable, popular woman comes across as cold. Hector is never seen playing spy, only getting nervous and upset about the potential of being caught. Raskin is supposed to be the “funny priest” but never seems to tell a joke. It seems strange that these characters were not fleshed out into who they were written to be.

The script is solid and has some sections which are funny, but unfortunately the comic timing of the two British soldiers is misjudged and we are not given enough time to laugh as an audience. At one point, a group of three Gestapo agents storm the apartment and disappear off stage almost immediately, never to be seen again.

Credit must be given where due however, the play maintains a verve of 1940s glamour throughout and in the sections where the performances managed to land, following the plotline was enjoyable.

Leopold Vindictive will play at TheSpace on North Bridge until the 24th of August (day off 18th) at 15:20 daily as part of the Edinburgh Fringe. Tickets are available through the Fringe Box Office.