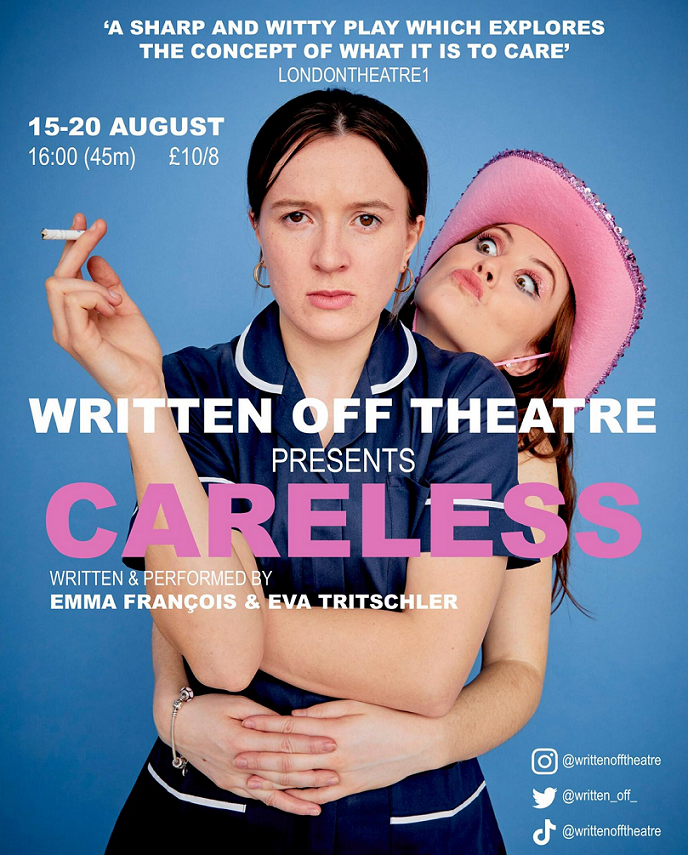 We all know that those who care in our society are underpaid and overworked – but do we know the realities of what stress that puts on our minds? Can you make rational decisions when the people you work with keep dying and you’re in a constant cycle of grief? Careless seeks to raise these questions by holding up a mirror of blue-collar workers stuck on the hamster wheel against the privileged, aspirational who view those jobs as mundane and unimportant. Sam is a care worker living with her housemate Bryony, an aspiring actor. Neither characters are prone to good decision-making, and this piece explores how far they will go to support each other in an expensive city full of moral doubt.

The play opens with Bryony delivering the famous Macbeth “Is this a dagger…” monologue to the audience, while fully glitzed up in a glittery top and cow-pattern jeans. What unfolds is the hedonistic build-up to her 25th Birthday party, muddled in with the fact that she has an audition deadline that very same night. When Sam comes back from a long shift in which she has had to clean out a man’s piss condom (yes, you heard me), and witnessed the death of one of her closest clients, calamity ensues as the two try to rattle through the evening without the stress of their respectively different lives melting them down.  It isn’t long before secrets are unveiled – Sam hasn’t been coping well with the cycle of grief she’s stuck in, she’s got too close to her clients with devastating consequences. She can’t believe that the new girl completely lacks common sense, and her lack of focus leads to an accident with fatal consequences.

There’s a lot to unpack with the performances on display, which are the heart of the piece. Let’s start with the good – and there’s plenty of it to discuss! The characterisation from Eva Tritschler’s Bryony is fine-tuned to perfection, she oozes the misguided confidence of a struggling actor in her mid-20s, caught in a race against time to launch her career or fall-back on teaching. During the scenes where Bryony has to defy Sam’s morally questionable behaviour, especially at the start of her birthday party, she shines – her face is poised, defiant – we witness her draw a self-destructive façade over herself and drown in the consequences. It’s pure joy to watch unfold, the cathartic release we’ve all had to commit to when a big emotional event happens right before a night out. The physical theatre interaction between Bryony and Sam in the party piece blends well with the piece. This sort of integration is rarely achieved as it usually looks a bit cringe-inducing, but here it fits naturally into the paradigm shift that happens as we descend down a spiral of ethical chaos.

Emma François’ Sam is also well-characterised, and the sharp difference between the two women is evident, giving the audience the buy-in that they need to stay invested with the story throughout the 50 minutes. Sam is a woeful, emotionally-destroyed character and this veneer doesn’t crack until a little bit into the piece. This feels a bit like a weird choice given how deep the rabbit-hole goes for Sam, and I feel like the build-up within the narrative could be a little more steady rather than dropping the audience right into the deep-end. The twist of Sam’s character is a natural direction to draw attention to the piece’s central themes, but we’re not quite prepared and it feels like a stark and abrupt interruption to the plot rather than a point that the story naturally flows toward.

The whole piece is aesthetically covered in a rosy, sparkly lightness which contrasts with the grim underbelly of life in a city where the cost of living is spiralling out of control and everyone is working unsustainable hours to support themselves. The ethos of the piece is dropped into the story halfway through the show by Sam – “Society wants everyone to live longer, but nobody wants to work for £10 to care for the elderly”. This is a poignant, nuanced philosophy and we’ve felt the ramifications of our progress-without-progression economic model readily over the past few years during the pandemic. Careless takes the weight of pressure on carers seriously, but never takes itself too seriously, shining a sarcastic light on our supposed emotional investment in the NHS while we let it, and it’s staff, wither and die.

Poignantly funny, Careless sparkles in a glittery darkness. You can’t be behind Bryony and Sam’s decisions ethically, but you’re emotionally invested in them to the point where you’ll hear the show’s philosophy out. Wry, smart and optimistically gloomful – Written Off Theatre are a duo to watch.

Recommended Drink: Careless is a Pink Gin and Lemonade – you think it looks all cutesy and fun, but in the morning you wake up wondering what horribly immoral decisions you’ve made.

Give some time to care about Careless, catch it at TheSpace @ Surgeons Hall, Theatre 3, at 16:00 until August 20th. Tickets are available through the EdFringe Box Office.