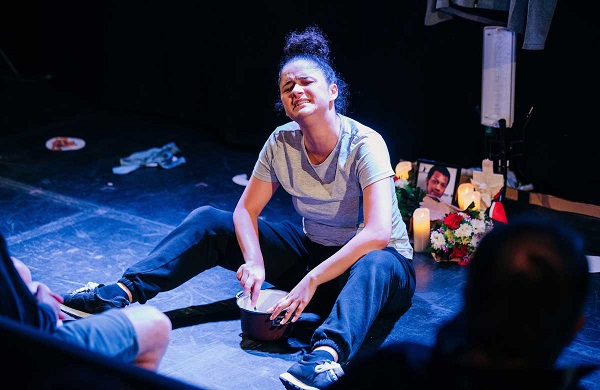 Block’d Off is an incredibly diverse, sprawling piece of one-person theatre. Those things don’t feel like they should go together – but the piece covers life in a block of council flats in North London, the central performer Camila Segal spans the lives and personalities of all of the residents in the block. From a Brazilian grandmother who barely speaks English, to an Etonian posh boy banished from his parents’ townhouse, a pair of drug dealers going against the grain of their agreement with a local gang, the list goes on. It is an outrageously ambitious piece of theatre, attempting to create a kaleidoscopic view into the life of people ‘blocked off’ from breaking the cycle of poverty.

The stories of each character twist and wind in different directions which are all threaded together by a deeply traumatic and rushy Thriller-style ending which takes place over a couple of minutes within the block. Kieton Saunders-Browne’s script rushes between the story of each character, exposing them to the audience for just long enough to keep us hooked, dragged into the drama between each flat and just about keeping up with the internal geography of the whole thing. The real impact of being connected with each character, even if momentarily, is that there is just enough investment that we feel genuinely shocked and scared when we come towards the end of the piece and everything rushes to a head.

Money, power and comfort and the acquisition of each of those are central to the characters on display. A young Father, thrown from gang violence into fatherhood, lives vicariously through his daughter and will do anything to ensure she gets good results and makes it to law school. The two drug dealers simply dream of escape – to Spain, far away from the social issues of the block. Every single person in the block is caught on a hamster wheel – which Saunders-Browne uses the example of the ‘Rat Park’ to demonstrate. In the aforementioned experiment, rats were given a cocaine drip and a water drip, and only used the cocaine when they had nothing to do and no other rats to interact with. In this sense, the presently existing social housing estates and the way society tosses people into a cycle of debt and poverty leaves us sucking on the cocaine drip – to cope.

Block’d Off beautifully demonstrates how Britain’s establishment poses aspiration as the only escape, rather than building change grassroots within a community or investing in public services, we have to depend on ourselves to succeed – even when that success is blocked by systemic pillars which stand in our way. Years of austerity, cuts and hardship have led to a wheel that people can’t get off. The show is passionate, emboldened by a movement fighting the Cost of Living Crisis. This show puts the stories of working-class people at its core, fighting for justice, and a compassionate respect for those around you.

There’s no doubt that this show has flair and fire about it. Structurally, however, there’s a lot going on. A lot. Segal’s performances on the whole are very good – especially of the Brazilian grandmother and the young daughter about to take her exams. Sometimes things feel a little bit close and you get very confused at which character is speaking, where we are in the building and what we’re supposed to be looking at. It takes a couple of minutes for your eyes and ears to focus on what’s happening, and by that time we’re onto the next vignette. It’s a sharp method of storytelling but it doesn’t quite cut the mustard with ingesting everything you’re seeing, and the show definitely loses impact because of this. Plus, Segal’s briefly attempted Irish accent is a bit straining on the ears for anyone who has ever been to Ireland, or even heard an Irish person talk.

Block’d Off fights fire with fire – a bombastic, defiant show which serves a platter of discontent in light of an indifferent, harsh world that tells you that you should be doing better. It shines a light on the systemic circumstances that keep people on the hamster wheel of poverty. This is the kind of theatre that changes things – it just needs a wee bit more focus.

Recommended Drink: Block’d Off is an Espresso Martini – a wake-up call with a biting vodka edge. Perhaps served a little too short however. Catch Block’d Off at the Pleasance Courtyard, Above, at 15:10 until August 29th (not the 23rd). Tickets are available through the EdFringe Box Office.