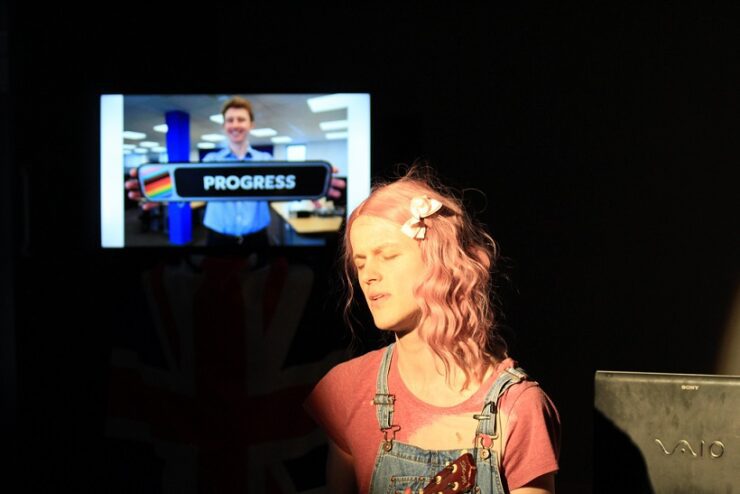 The Gay Train takes a thoroughly good go at diving headfirst into the way that Trans lives are presented in the media and the devastating consequences. In a world of P*ers M*rgan purposefully silencing the Trans Rights movement and framing it as healthy debate, even when it evidently is not, this kind of theatre is urgent and important. In fact, the aforementioned gutless false demagogue is the target in writer Andrew Lake’s crosshairs, as we see non-binary activist Lin face up against a TV host more interesting in clickbait than coherence.

Lin’s story is tragically prevalent in society – a Trans person physically attacked for expressing themselves. In the wake of rising transphobia in Britain, Lin takes to the screen to plead their case and ends up eventually making a mockery of the whole situation. This plotline is threaded in between vignettes where we see Lin try and win over politicians for their campaign, struggled and suppressed by an indifferent political system. There are also scenes in which Lin chats with their mother, Dawn, and the pair try to unwrap each other’s misconceptions about gender through their familial relationship.

In fact I think the best scenes of the play, certainly the most revealing and in some sense educating, are seated within those moments between Lin and Dawn. Their conversations are done with a light touch – Dawn is well intentioned and wants to learn but struggles to reconcile the feminism she fought for with the way that Lin perceives Trans Rights being enshrined in law. Lin is frustrated by their mother’s perceived ignorance, yet is perhaps too young to understand that education could be more useful than anger when you already have a pre-established relationship with someone.

Declaring interest – as a non-binary person I walked into this a bit apprehensive. Anything that takes such a nosedive look at Trans Rights in the media is bound to hit some notes and miss some others, though I feel Yellow Mug Theatre have really gone above and beyond to demonstrate a semblance of three-dimensionality with this debate. Dawn, the well-meaning but confused mother, is done with an especially careful touch to present how even the best-intentioned people can harm the lives of Trans people, or protect them if they direct their energies in the right place. I found myself greatly connecting with this story and I’m so pleased this kind of representation is here. The appalling TV host character is an absolute monster – written with venom and spite, so not too far away from the real thing.

There are a few things holding The Gay Train back in achieving its aims – though they should be viewed in tandem with how all-encompassing and ambitious this piece is. There are times where the performances feel a little bit wooden, possibly under-rehearsed. You can visibly see some of the actors trying to remember their lines or get the words out, which is a bit of a shame given the extent the piece goes to deliver a hearty message of inclusion and solidarity in the face of adversity. It feels as though The Gay Train needs a bit more workshopping to make the words and movements feel natural and relaxed, rather than uptight, and the actors need to let their guard down a little more to perform to the best of their ability.

It should be said that the unfortunate truth was that I was one of only three people in the room – everyone should see this show, whether you’re a part of the community, someone who is keen to understand or someone who thinks the whole thing is a load of “woke nonsense”. The play teases itself by using the word ‘Woke’ in its promotional material, and the whole thing has a snarky, brash approach to its opponents. I can’t help but feel the performances suffered because of the lack of turnout, perhaps the venue wasn’t quite the right fit either.

The use of a Powerpoint presentation, making it a multimedia piece, seems a good fit, although the slides do feel a bit 2007 English Language Class, it would be nice for the quality of the multimedia elements of the show to match the brass and proviso of the show. Another slightly awkward element of the show were the moments in which Lin was strapped to a trolley, and nobody mentions it. I get the imagery but it felt a little bit obvious, maybe forced.

To end on a high – the musical accompaniments to the play are genuinely joyful and very, very funny. The opening song tackles tokenism and virtue signalling from corporations – all presented in a really compact and fun way. This show balances it’s bitingness with a cheeky wit, fighting hate with love and compassion, as well as recognising the value of campaigning against the ignorant and oppressive. Made with wonderful intentions and delivering a sucker-punch to the transphobic establishment, this is something everyone can benefit from.

Recommended Drink: The Gay Train is an Appletini – outwardly queer, ready to deliver a sour experience to the ignorant and unprepared, but maybe needs a little bit of updating.

Catch The Gay Train before it leaves the station between August 17th and 28th at RSE – Welcome East, at 20:10. Tickets are available through the EdFringe Box Office.