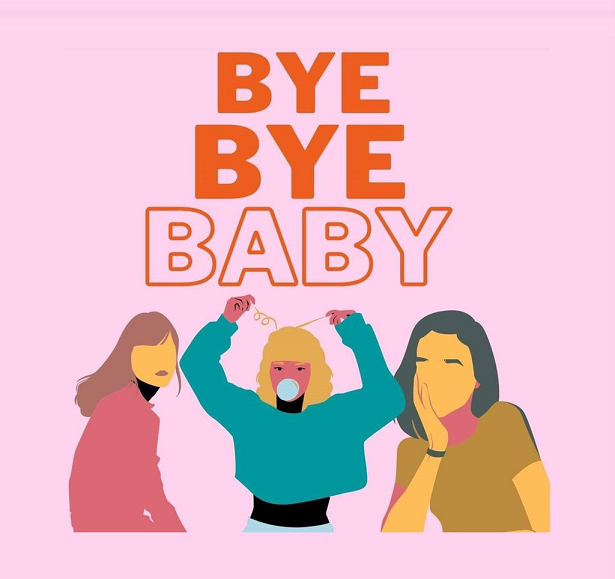 What comes after the club? Ask any Uni student and the answer is universal – chips, an Uber and maybe a deep chat or two. Bye Bye Baby grabs hold of that concept by the horns to deliver a fast-paced, melodromatic romp that strikes that difficult balance between heavy topics and being an absolute riot. It’s the sort of theatre that engages people who otherwise wouldn’t care about tricky topics. Smart, resilient and ultimately full of hilarity, Aireborne Theatre are one to watch.

Geeky head-in-the-books Lucie is on her first big night out. It’s the first time her friends have seen her drunk like this, and its not long before secrets from the summer are revealed. Ali is the posh, middle-class friend who refuses to admit she’s middle class. She has a seemingly long dating history which comes back to bite her not long into the piece. Finally we have Ellie, who is concerned she might not be a feminist because she wants to have kids.

Bye Bye Baby actually has a very unique perspective on its central theme which may not be immediately apparent when you sit down in the theatre. This is a look at motherhood from the eyes of young women facing the existential choice when they leave Uni – career or family? Lucie faces a deeply divisive decision in being a young pregnant woman in a society which stigmatises both abortion and being a young parent. The richness with which Fabien O’Farrell’s script handles these topics is delightful. From silly little moments like interrogating a balloon with Phoebe Waller-Bridge’s face on it to heartfelt discussions about being ghosted. All of it fits together nicely and makes a comprehensive view of its subject matter.

The performances on display are deeply special. Drunk acting is infamously difficult and each of them manage to keep it up across the 45 minute runtime even providing an arc to which they start to sober up. Besides being impressive, its also hilarious. The central character of Lucie is very believable for a young woman coming into university, naïve and bookish yet thrown into the wild with deep ethical decisions. Her performance was very pleasing to watch and you can’t help but feel for her. The standout really came from Ali, who pushes the Made in Chelsea in denial vibe to the max, she is a bold and defiant character but never complacent and always aware of the value of the friendship group she has.

Although not quite coming-of-age, Bye Bye Baby deploys the same themes to keep you talking about the topics. The inclusion of the side character of Tom, the ‘nice guy feminist’, provides a nice counterweight to the girls and facilitates the discussion further. The acting for his character is very believable and he comes across as a complete cockwomble. The show absolutely flies by, the script is super tightly controlled and we never spend a minute not engaging with feminist topics or having a cheeky laugh.

Like the end of any great night out with your pals, Bye Bye Baby is a dizzying spiral of conversation and confusion for our characters. They’re so damn loveable you can’t help but get involved. The whole piece has a glittery, light feel but keeps you incensed in the conversation with abortion the whole way through. Bye Bye Baby is zestful, zany and smart. A gem.

Recommended Drink: Go on, relive your Uni days with a Blue VK and a Baby Guinness – be sure to get chips after.

Catch Bye Bye Baby at TheSpace on North Bridge until August 13th, every day at 17:50. Tickets are available through the EdFringe Box Office.