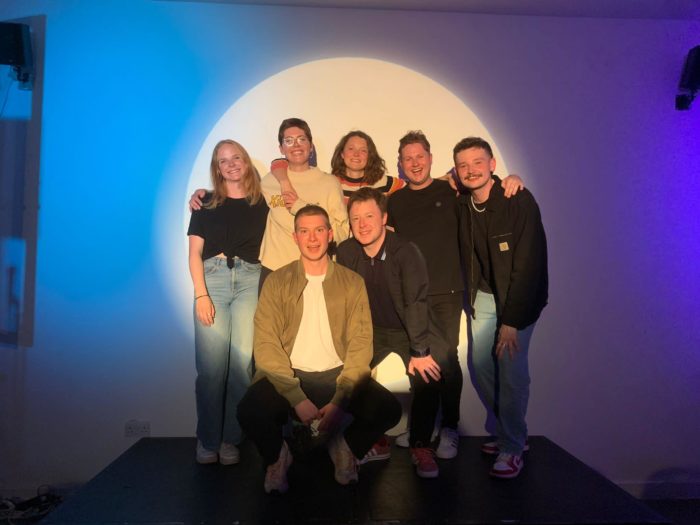 Waddle is absolute top tier late night Fringe material. The sketch comedy troupe have put together a tapestry of pop culture satire which clings to a tradition of the absurd, silly and flat out ridiculous. Above all, it’s very fucking funny, owing to the foursome’s tight-knitted chemistry and the ability to laugh at themselves when they need to. Sometimes sketch comedy can alienate and be limited to in-jokes, but Got Legs keep you wired into their comedy mainframe and laughing along with them all the way.

The sketches range vastly in theme, but mostly keep to a register of entangling popular TV shows, trends and celebrities with a catatonic snare of some absurd situation. Think Martin Lewis forgetting to bring a Bag for Life to Tesco’s and being scolded by a fan for his un-parsimoniousness. In another sketch, James Corden auditions for a school play, unable to fight his desire to be in every bit of media he can. Writers Alex Stevens, Tiernan McCartney and Livvie Newman clearly have a cynical view of celebrity culture.

This is not necessarily the focus of the show however – the ethos of our performers is to take something we all know and tease it apart to find the most outlandish situation you could apply it to. There are some sketches too which take tropes in media as their target – for example a choral cult singing death chants yet all dreaming of something else… Like an ABBA song.

The performers are on rotation, thus my experience here will change night-to-night. Harry Allmark as Star Wars fan-fiction writing Cyrano was an absolute highlight. The satire of Above Deck with pirates too was funny, even when it descended into laughter among the performers, the audience stayed on side. Our cast of Allmark, Anna Rømcke Høiseth, Joe Phillips and Olivia Snell absolutely bled confidence in themselves throughout, keeping you feeling cradled like a little laughing baby in their arms. It was clear we were in safe hands throughout, and the hour sailed by with joy and hilarity.

Poking fun at our every day lives with the creativity most of us wish we had, Got Legs have put together an absolute symphony of jovial hijinks. The four performers exude a natural funniness, like the class clowns from your school all got together to poke fun at the teachers, one by one. Got Legs is those one-in-a-million hidden finds that’s just straight up laughs. Their show is somehow both a wonderfully ironic character assassination of pop culture and a vivacious, side-splitting hour of cheeky madness.

Recommended Drink: Let Tom Tumberger teach you how to make an Irish Coffee and impress the ladies.

Toddle down to see Got Legs Presents… Waddle as part of The Room Above’s Comedy Hour at Just the Tonic at the Grassmarket Centre – the Little Kirk, which is on at 22:00 until August 14th and then again between August 16th and 28th. Tickets are available through the EdFringe Box Office.

OPINION: The 6 Shows Binge Fringe Reviewers are Most Excited to See at EdFringe 2022