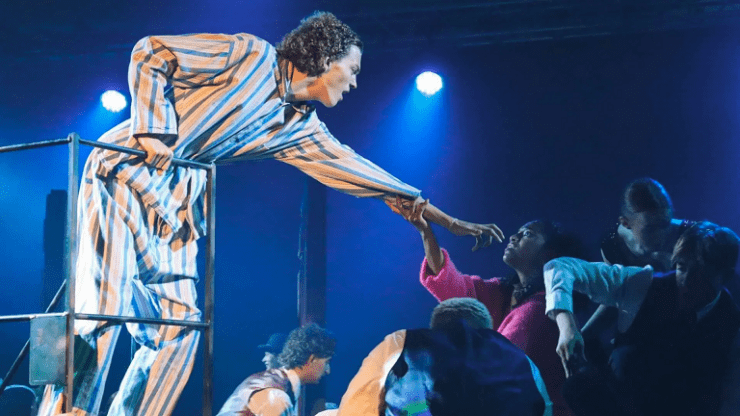 Young Pleasance promised a “re-imagining” of Kafka’s classic story The Trial. It’s a hard feat to completely re-engineer the plot of the story into a new message, given that Kafka’s own was so strong. Kafka envisioned bureaucracy as unescapable, crushing and surmised that belligerence is not tolerated. Unfortunately, this new concept for The Trial is guilty of a complete lack of message.

The show’s performances are strong and the actors it platforms are actually often brilliant. As an ensemble, they work hard to deliver a stunning visual feast. Its production design is slick and smart, with a great sense of wholeness and evident funding poured in. Sadly, The Trial comes off more as a showcase of the cast’s talents than a standalone piece, foregoing delivering a 21st century impact for a rather sedate sense of meaning.

The story begins on Josef K’s 21st birthday party, reborn for the 21st century as a vaccine trial. K has broken his agreement by getting drunk and the doctors are angry as all hell. His friends try to offer assistance but are bounced back by unusual stipulations and unjustified rules. Its not long before we seem to wander into K’s mind, breaching the boundaries of reality and entering that famous Kafkaesque labyrinth of bureaucracy.

The actor playing Josef K is an absolute delight to watch. He is a slender character, much like Kafka himself, and his body movement dips and dives around the maze of corridors with verve, vigour and a sense of complete disempowerment. Kafka would be very pleased with the performance. Some of the characters K meets are also stunningly performed – a brief romantic interest floats past K in an ethereal glaze. A scene in which he meets his artistic heroes is divine to watch, all performed with style and purpose.

K bends through corridors and paperwork, meeting characters who present him with walls and barriers to his Trial. Confusingly, the vaccine trial and the imaginary judiciary trial are never fully linked up. Nonetheless, we are treated to ensemble singing and movement which appears monumental and vast. It’s a real treat for the eyes and ears, but you do feel like you’re waiting for that moment where everything comes together. The moment comes and passes, leaving you wondering what just happened and for what purpose.

The reveal of K’s crime at the end (spoilers ahead, but it had to be talked about) is an utterly confusing artistic choice. In Kafka’s work, K is butchered in a quarry before he can learn what he is accused and found guilty of. Here, Young Pleasance have opted for what I can only describe as the most Middle Class interpretation of the themes they were aiming at. K is found guilty of… travelling to London and studying Fine Art against his father’s wishes?

Recommended Drink: Stay away from the Vodka Lemonades or you’ll end up like poor K here.

Catch The Trial before you’re whisked away to be judged, every day at The Pleasance – Beyond, at 15:00, until August 14th. Tickets are available through the EdFringe Box Office.