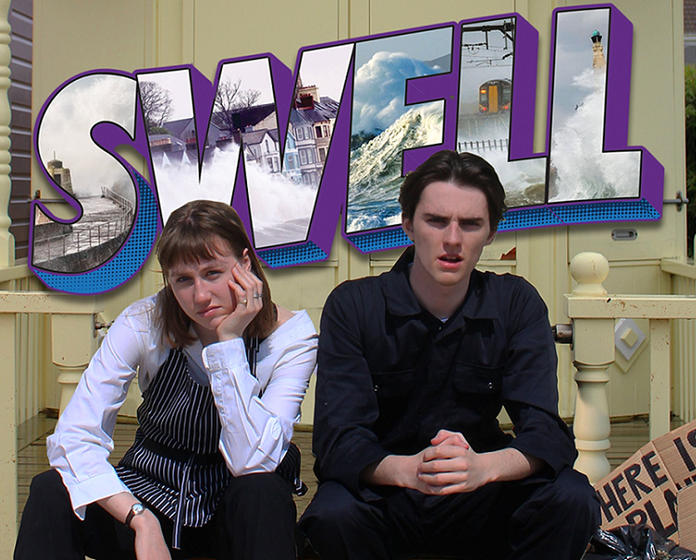 Swell is a remarkable piece of worldbuilding theatre set in a world that is ironically crumbling and falling apart – not at all distant from our own. The town of Swell on the East Coast of England is being “decommissioned”. We follow characters Ava, Josh and Adi, young people living in the town who become among the UK’s first climate refugees. It is a winding, Kafkaesque tale lifted into tragic relevance by spectacular, fraught and angry performances.

Josh and Adi, his sister’s girlfriend, are on their way to work. On the bus they discuss the climate protestors outside their factory, dismissing them out of hand as extreme. Ava, Josh’s sister, is working at a café in the seaside town which relies heavily on tourism. The town is at risk from coastal erosion – with floods decade after decade but little has been done to reverse the inevitable tide. Our characters are met with an impossible reality shortly into the play – their town cannot be saved from rising sea levels.

Adi is one of the earliest evacuees, finding it easy to leave amongst a parallel rise in hate crime against Asian people in the town. Later on, as the town beings to decay and social strife grows, a robbery is similarly blamed on the Irish Traveller community. Swell does an immaculate job at presenting the intersections between the climate crisis, race, culture and identity. In the face of systemic destruction and rampant deprivation, the people of Swell turn against one another, instead of against the government and corporations which have driven them toward extinction.

Max Beken’s performance as Josh is a stand-out. His character begins on a spiral into thuggery and abjection from society. He begins rather likeable, and we quickly see how manmade destruction mixed with social poverty and unemployment fuels the incitement of barbarity. This is not to completely remove personal responsibility, as Beken does well to present Josh as dejected and not where he wanted to be in life at his age. He is a nuanced, three-dimensional character in a turmoil-filled world.

Rachel Nicholson’s Ava is the main lens through which the audience captures a sense of the moral panic of the world of Swell. She appears the most ethical, calm and collected of the three in light of the oncoming disaster. Her familial ties to the town of Swell are tested, pulled and tangled as the populace begins to realise their town has been given a death sentence, and slowly marches towards it.

Karan Maini’s Adi complements the show well and provides for that important moment of intersectionality overlapping race and climate early on in the piece. Beyond that, he slightly disappears towards the second act of the play and it becomes more of a two-hander at that point. The play’s action moves incredibly quickly and this is both a strength and a vulnerability. Sometimes it can be a little hard to focus precisely on what’s being said when it is in the throws of a speedy timeline. Consequentially though, we are met with the pace at which our climate is being destroyed.

The play utilises multi-rolling to its strength, presenting characters from across the town across stages in their lives at which they are about to be evacuated. From the ancient Mrs Marlborough to Housing Association member Dawn, the three characterise well and show off their talents. Tom Foreman’s script and direction operates as a cross-section of society, a world built to be dismantled by the tides of nature in face of humanity’s destruction of the planet. The space is also utilised well, bringing characters into the environment in an immersive way. It is timely, smart and devastating.

Soundscaping is an important part of the piece. Tom Chandler’s design is an epic accompaniment both during incidental changes and throughout the piece. Their eye for detail pays off here – weaving audio from interviews denying climate change a la Don’t Look Up, and piercing white noise which scrambles the narrative and on-stage noise. The production design makes the piece even more urgent and builds the action poetically.

Swell exists against the backdrop of existential threats to our communities, our homes and our livelihoods. The show’s promotional material highlights towns such as Fairbourne in Wales and Happisburgh in Norfolk who have both been told that their towns will fall to rising sea levels. This is an incredibly important piece of theatre reaching this Festival at a crucial time. Swell reminds us that the effects of climate change will not just be heatwaves, but the destruction of the very things that make us human. It is a poignant message, delivered with flair and resolve. It might just be the most important thing you see at the Fringe this year.

Recommended Drink: Swell is a shot of Tequila, no chaser. They’ve made it taste as good as they can, but you know from the minute you drink it that you’re fucked.

Catch Swell as soon as you can at Underbelly Cowgate – Belly Laugh every day at 1pm between August 7th and 28th, except on the 16th. Tickets are available through the EdFringe Box Office.