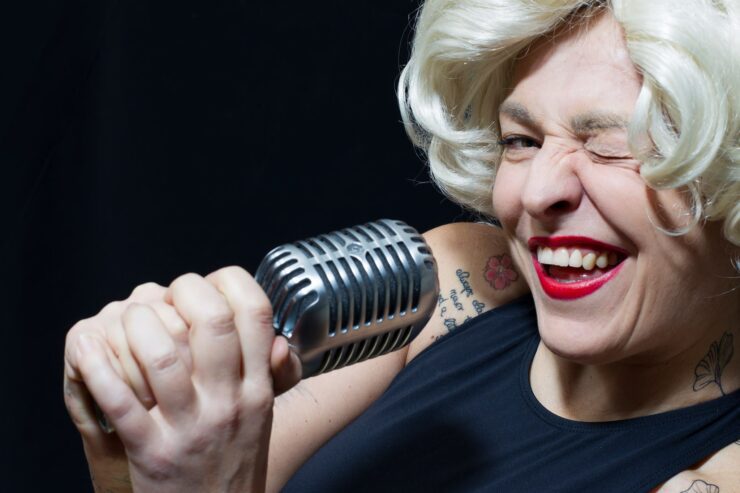 We are first introduced to Anita Luna – The Diva in what appears to be her dressing room. In a mesmerising performance livestreamed in its entirety, we learn that the stage is Anita‘s home. She’s dressed in a flowing white dress (the first of a few costumes throughout the performance).

Anita leads into her first musical performance – a song about not caring much about the opinions of others. She’s joined every so often by a stagehand in full PPE. The stagehand brings her over her two dogs kept inside her handbags, before long we are led into the core meaning behind her show’s title. She is The Diva. She can do anything! She’s the actress, the gymnast, the poet.

In one of the more surreal moments of the show, Luna stares down the camera and delivers an Italian poem. She makes a ball float as she is of course, the Mentalist. After a glitzy jazz number and a giggle-inducing impression of the Diva by the stagehand, we are waltzed into her final hours as she brings the show to a close with a rendition of Queen’s Who Wants to Live Forever?

Besides the performance being hilarious in it’s wrappings of excellently timed wit, Luna is a talented singer and performer who brings mirth and glamour to the role. Her physical performances are wild and out there, giving every effort to entrancing the audience with this audacious character. In some of the more emotional elements of the show, she handles this content well and transitions between light and bouncy or dramatic and serious.

As a live broadcast, this show is also truly commendable. It’s hard to see how she could have improved upon this element of the show. The set design behind Luna and the stagehand really gives off exactly the vibe of a dressing room and you are truly immersed into the performance.

This show is a true wildcard. Hilarious at points, fantastically enjoyable at others and emotionally connected. Unfortunately the costume changes do sometimes make the show feel a little too cumbersome, they are quite long and sometimes the filler content just didn’t quite match the quality of the times when Luna took centre stage. Similarly, there were times when the performance seemed to continue on a little longer than it needed to in order to get the point across.

A careful bit of snipping around the edges would move this show from the category of great to excellent. The Diva is, as I mentioned, a mesmerising character with lots of promise. The performance never takes itself too seriously and knows exactly when and how to sprinkle a little truth about loving and forgiving ourselves.

You can keep up with news about future performances of Anita Luna in The Diva on her official Facebook page.