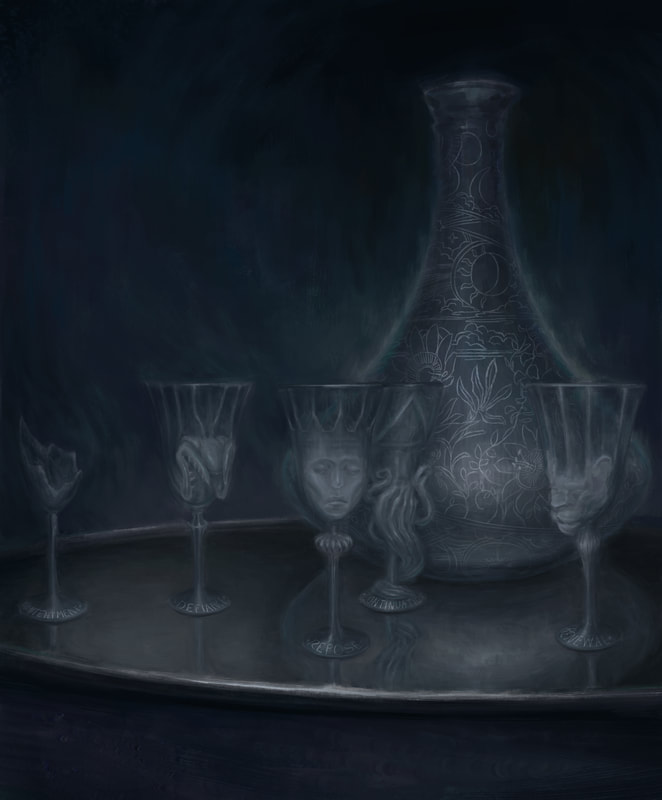 It is rare that something definitively thematically original and bold manages to make it’s way into the mainstream. Etched Glass Decanter may not be in the mainstream yet – but it’s unashamedly obscure, wild style marks it as one to watch. Michael Seebold’s script is dripping with unusual metaphysical discussion. The confusing, winding story is masterfully etched onto a crafted world in which Evening Crane Theatre never underestimate their audience – throwing them right into the thick of it.

We begin in an Observatory with a character named the Astronomer, played by Reid Watson, observing the movements of unseen paranormal beings. We cross (possibly dimensions) to The Astronomer’s Wife, played by Leah Schwartz, who can hear something breaking it’s way through a false panel in the back of a bookshelf. The Astronomer returns home and the pair engage with the spirit that is breaking into their home and the objects it brings with it.

Across the span of the show, we are taken on a journey that eventually ends with the Blind Dutch Master, played by Johnny Segalla, who has lost two of his shoes on three islands. Here plays one of the most entrancing scenes where The Astronomer’s Wife describes the fauna and flora of the islands in the kind of detail you’d expect in the opening scenes of a fantasy novel. They eventually return to the Blind Dutch Master having retrieved these items, only to find another mystery has befallen them.

The worldbuilding in Etched Glass Decanter is serene. You are transported into this world and your imagination is hijacked by its surrealness. I have always been a firm fan of any creative work that truly transports me, and as a Radio play, this show makes exceptionally good use of its format to bring you to that place. It felt more like reading an intensely detailed and long novel that you can completely immerse yourself within. If this show was a book, I would describe it as a page turner.

In between the writing, the performances from Watson and Schwartz are equally captivating. The looseness of their speech and the way they both dance around the terminology used to describe their world is a big reason why this show succeeds. Also admirable is the great lengths to which the sound design has gone to create the crazy mesh of effects – keys jangling over a void, the back panel of a wardrobe shifting – these obscure and weird images are created brilliantly in your mind.

This show truly is a master work of audio storytelling, born in a blend of Beckett and Kafka, it feels occult – even paranormal. I feel as though it’s origins are not of this Earth, and that’s exactly what it intended. Bravo.