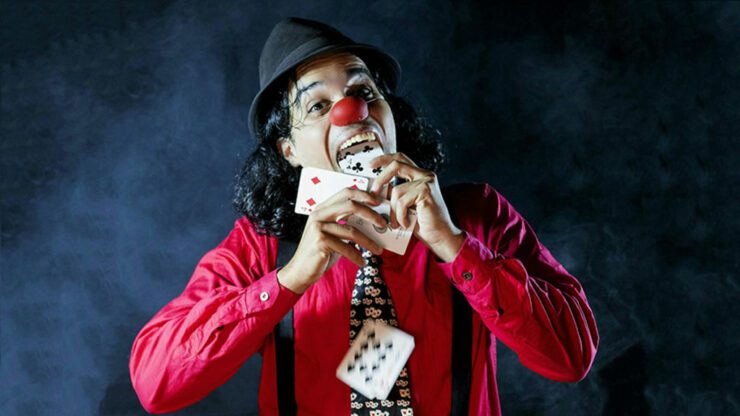 I must say that when we at Binge Fringe discovered that the Paris Fringe was planning to stream some performances online I was pleasantly surprised and intrigued. Partly because I was keen to get some new theatre in my blood, but mostly because I was interested in seeing how the individual performers would choose to present their work.

The performance first that I had the delight of viewing was that of Ewerton Martins, a Brazilian comic who had elected to stream a recording of a previous show, rather than perform via live broadcast. I was sceptical at first, however upon viewing the show I can see why this was not an option.

This show demands a live audience to be appreciated properly as Martins relies on their reactions and participation to propel the show forwards. Through a series of card tricks, some classic, others more obscure and specialised the audience is taken on a roller coaster of laughs and amazement. Martins’ style is goofy and melodramatic, embodying his clown persona with ample vigour, as a result of which I have no problem in confessing I’d watch the show again purely for his infectious energy.

It’s very difficult to go into details on the specifics of the show as the pace is dangerously quick. Blink and you may well miss a trick. But that in itself is where a lot of the delight stems from. A significant factor of my enjoyment came from the enjoyment of the audience, who laughed and glanced around at each other throughout. They were clearly having the time of their lives.

El Diablo of the Cards, although not a seemingly complex show, fills its audience with laughter, joy and perhaps a little confusion. Ewerton Martins clearly loves what he does, for it demands such energy to be a success. Certainly, a thoroughly enjoyable opening to my Paris Fringe this year.

El Diablo of the Cards has now finished its run at Paris Fringe 2020. You can keep up with details of future performance via the show’s dedicated Facebook page.