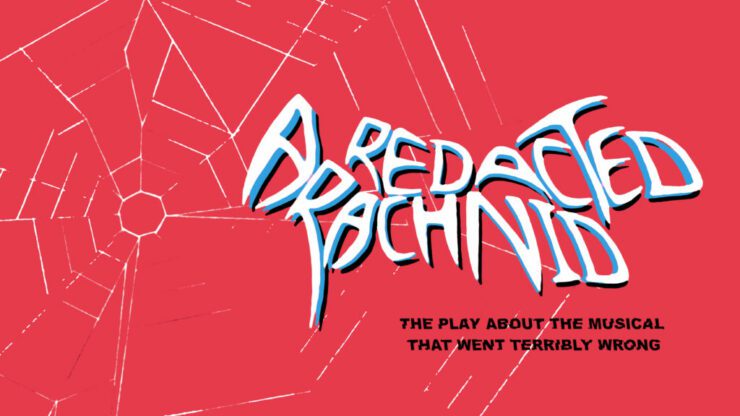 Redacted Arachnid is so much fucking fun.

From their own admission, the Corpus Christi Owlets found the Wikipedia page of Spider-Man: Turn Off the Dark, the ill-fated Spider-Man musical backed by Bono from U2 which was famously absolutely shite, and decided from there to adapt it into a Fringe show. It’s a delightfully original and bizarre premise for a comedy, made all the better by the fact that the real story is delightfully original and bizarre.

After his predecessor’s death, an established theatre producer, Michael Cohl, takes on Spide- sorry, Redacted Arachnid: Switch Off the Night, determined to make it the biggest show in Broadway history. What follows is an hour of mental mishaps, mistakes and mayhem told through absolutely superb physicality and comic timing by an ensemble cast.

Caleb Barron, Joshua Fine and Jake Rich’s script is ridiculously well-paced, made all the more impressive by the boundless energy of the performers; of particular note is a scene featuring none other than J. Jonah Jameson (who, for the purposes of copyright, is definitely not J. Jonah Jameson), as well as their satirical re-telling of the first act of the show’s original draft. Were it not for our narrator’s (Daniel Ergas’s Cohl, an excellent starring role) prior affirmation to the audience that, “yes, this really was the story,” you’d be forgiven for thinking it the kind of madcap original comedy you see all over the Fringe – and this is without mentioning the macabre, surreal energy of the Disney scene.

Outrageously funny and absurd with a killer, breezy script behind it (it goes to considerable efforts to avoid using the term ‘Spider-Man,’ each and every single one somehow managing to be absolutely hilarious), Redacted Arachnid is simply a must-see at the Edinburgh Fringe Festival. We cannot recommend it highly enough.