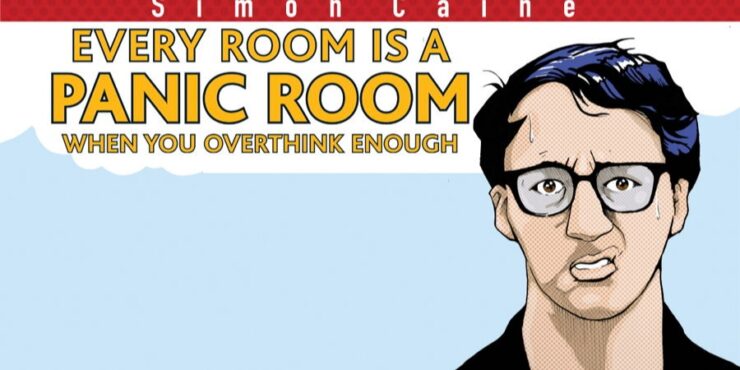 The only note I wrote for Simon Caine’s stand-up show, Every Room Becomes a Panic Room When You Overthink Enough (definitely not a mouthful) was “affable, John Oliver vibes.” Apparently, I’m not the first reviewer to make the comparison – comedian Doug Stanhope described Caine as a “more authentic John Oliver.” And, yeah. It’s true. They look and sound quite similar. In order to find out if I’m telling the truth, I guess you’ll just have to go and see his show.

Where the comedians differ is in content: Oliver is a political stand-up, but Caine’s show focuses in on diagnosing just what has been going wrong in his life, framing it within the context of therapy and encompassing everything from awkward sexual encounters to poor financial decisions.

You’re probably thinking, entirely fairly, that about 93% of male stand-up comedians talk about essentially the same kind of thing. Somehow, though, Caine is able to keep the audience engaged throughout by involving us. At points, it feels like a group activity with a designated leader in Caine; at other points, therapy. In establishing a relationship between speaker and audience, the potential for awkwardness is circumvented. Of course, this is in reference to the material on sex, which is extremely easy to fuck up. It’s a credit to Caine that it doesn’t. Mostly.

It’s a sprawling story, going from a dodgy christening to a cake-themed mistake, and there are often times where Caine spends too much time explaining or building upon the punch-line of a joke. But Caine is affable, funny and interesting, with a killer closing moment that the audience is sworn to secrecy on. What could it be? Once again, you’ll have to see him to find out.