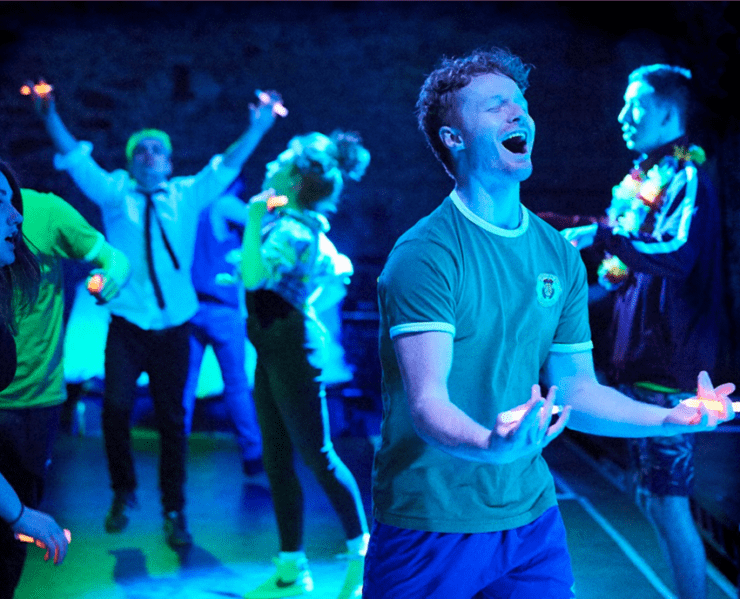 What would grandma find disturbing yet oddly charming…? Trainspotting Live. They’ve chosen all the good bits, made them palatable to watch without a post-show counselling session and run with the stealth of Renton pelting it down Princes Street.

It’s no easy task to take on Irvine Welsh’s Trainspotting, certainly the challenge is monumentally harder when Danny Boyle’s film adaption has been seared into our heads. King’s Head and In Your Face productions, presented by James Seabright have outdone themselves on this account. It would be Class A kind of criminal had this not sold out for five years running at EdFringe, received the acclaim it quite rightly deserves and wasn’t about to embark on a tour of the UK. The acting is stunning, the production elements are beautiful and the immersion level is just right.

Okay. Picture this… A dark room, glow sticks in hand, unce unce music a plenty, jaws are swinging left, right and centre. There’s enough energy from the swinging to duel Scottish Power and it’s hard to determine whether this is the bowels of EICC or Y Not on a Thursday. We launch into the trials and tribulations of Mark Renton and his gaggle of heroine dependent, economically depressed friends, as they navigate addiction, sobriety and the Worst Toilet in Scotland. It’s ultimately a social commentary, the kind that unearths and honours the history of an Edinburgh outside of August.

The episodic style rings true to Welsh’s original form of short stories, which can be a little jarring for folks begging for narrative structure. Although, this flexibility allows the piece to get its teeth into the more immersive elements. I feel this criticism would only come from the same elk asking why the actors aren’t as ill looking as real junkies and why there’s no baby on the ceiling.

Each member of this cast deserves the highest of credit. They morph into their various roles with distinct variations in characterisation making even the most dim-witted ‘Karen’ in the room suspend their disbelief. Honest, authentic and radioactively energetic. They are the lifeblood of this and not one person disappoints.

Renton is beautifully played by Andrew Barrett. He’s obscenely likeable, easily pitiable and you’ll see enough of him to end any curiosity. He’s stamped his footprint in the role, his Rent Boy is starkly his own. This is extremely difficult for a role so iconic and he flourishes as the driving force.

Lauren Downie (June/Alison/Ensemble) is the backbone of the piece. Her chameleon like ability to change to whatever a scene needs of her is outstanding. She is in equal parts a comedic powerhouse and an absolute heartbreaker.

Kyle Matson (cover Tommy/Ensemble) did a fantastic job as the show’s ‘moral panic button’. His shift from jovial mate to tragic fatality is no walk in the park for an actor and Matson made it look easy. Double props for covering the show! Our industry could not function, especially in times like these, without the insanely hard work of covers, understudies and alternates.

Michael Lockerbie’s Sick Boy is spectacular. He’s disgustingly charming, oozes with narcissistic confidence and his onstage charisma is astronomical. Beyond his brash commentary and wild attempts to pick-up audience members, it’s the heart wrenching reaction to the consequences of his heroine usage that makes his portrayal stellar. He’s a real one to watch.

Oliver Sublet (Mother Superior/Begbie) has a stage presence resembling the fierceness of a tornado. He’s a force to be reckoned with, if you’re ballsy enough. His scenes as Begbie were impressively terrifying and at times plain sickening. His zero to one hundred approach had the audience around his little finger and made for a hair raising experience.

Sleazy, grimy, honest and so in-yer-face. Trainspotting Live smashes through the twee misconceptions of immersive theatre with a tight grip on reality and leaves you feeling emotionally battered. You’d be mad to miss it whilst you can.