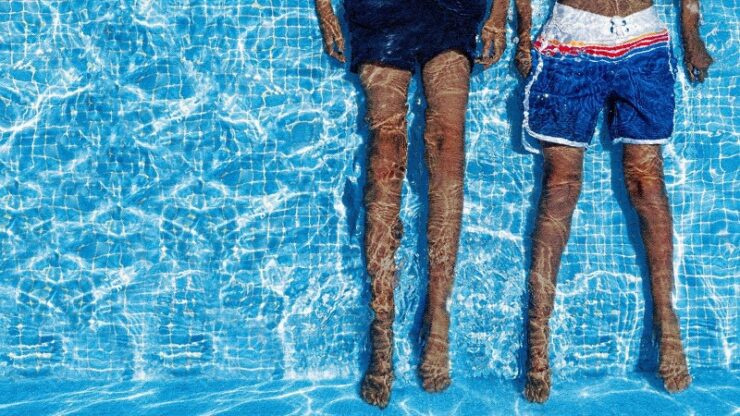 At the heart of Brown Boys Swim is a coming-of-age story set in a world of rich cultural difference – sometimes leading to euphoria and sometimes to a desolate sense of isolation. The boisterous and zesty Kash bursts out onto the stage to South Asian pop music, dancing wildly and freely. In contrast, the more gentle, focused Mohsen can’t quite get into his groove, yet is very sure of who he is. This applies both to the dancing and swimming elements of this show. Yes, the opening dance scene and the whole play are presented against the backdrop of a blue-tiled swimming pool in Oxford.

It’s an ambitious, bold piece of theatre with a genuine cutting edge. We watch as Kash tries to bag an invite to a popular girl’s Pool Party for both of the boys – fully aware that neither of than can swim. We take some time early on to contemplate the fact that there are many South Asian people unable to swim. Karim Khan’s script utilises real life as a navigation toward exploring cultural norms, how we can shed them or take them on as our own. The story utilises real-life stories of drownings. Swimming is both a life skill for these boys, a way to assimilate culturally so they don’t stand out at the party, and also a challenge to defy the status quo.

Much of the play focuses on the time in and around when Mohsen and Kash learn to swim – from being stared at as if they were criminals in a swimming pool, to diving accidentally right into the deep end and an eventual, sorrowful focus on those in their local community who have drowned. Drowning is an incredibly versatile metaphor in this piece – which focuses on the pressures on young British Muslim people both to exist within a world of alcohol, drugs and sex while also facing their cultural-spiritual calling in Islam. Mohsen treads the line carefully, which Kash derides him for, building to a shouting match in which each accuses the other of not being a part of their various worlds. We should also be clear that metaphor aside, drowning is a serious issue at the centre of this piece which is never underestimated, and treated with a heart-aching seriousness.

John Hoggarth’s direction of actors Varun Raj (Kash) and Anish Roy (Mohsen) is piercingly emotive, strongly physical and plays well with the poolside format of the piece. The boys’ swimming, dancing and movement is woven into the fabric of the piece, reminding us that they are moving through life at a pace they can’t control and in surroundings which are often out to cause them harm. Raj’s brash and rowdy presentation of Kash is instantly likeable, an underdog to his dying day, and a joy to watch. Roy creates a smart and courageous balance in Mohsen, who struggles more in being his own skin yet is ambitious and driven. The presentation of morality is nuanced, as we see Kash try alcohol for the first time we see a boy on the cusp of a life-changing moment, punctured by the story’s cutting wit.

It’s important to say that a current of upbeat, energetic humour runs parallel to the emotional story of the show. It keeps you in tune with the story. The show never takes itself too seriously with its characters, until the moment comes towards the end of the play in which it inevitably does. This piece narrowly misses out on perfection in the storytelling of its ending – I’m not sure how well it delivers the final act, which feels a little disjointed and unruly in comparison to the narrative neatness of the rest of the piece. The twist delivered at the end (no spoilers) is hard to swallow, and I’m not sure if it was the right direction for the ending, yet it still makes emotive sense and connects with you as an audience member. The closing moments of the show, as Mohsen defiantly dances on stage in the face of his fears, is hair-raising.

Brown Boys Swim creates a coming-of-age story for young British Muslims which is palpable – like the chlorine of the pool, you can taste it in your mouth and it won’t come out of your hair for days. I absolutely loved this piece of theatre, deeply rich in it’s storytelling mode and utterly enchanting as a spectacle.

Be sure to see Brown Boys Swim before it swims away from the Pleasance Dome, JackDome, at 14:30 until August 28th (not the 15th). Tickets are available through the EdFringe Box Office.

INTERVIEW: A Digital Pint with… Sean Morley & Benjamin Alborough, reviving all of our ‘Terry Wogan Screams’ at VAULT Festival