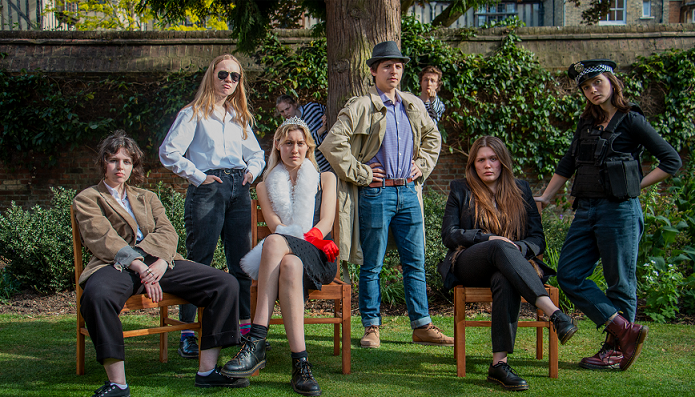 Looks like I picked the wrong week to quit drinking – we’re joined by the team behind Space Mystery: A Mystery in Space for a pixelated pint and a chat about all things parody, character comedy and Sci-Fi silliness. A Time and a Place Productions brought you the well-acclaimed Dr. Whom last year and they are back for another jovial jaunt into the cosmos this Edinburgh Fringe. Check it out!

Jake: Hey gang! You’ve put together a spoof inspired by Airplane!, following your sell-out run last year with a spoof of Doctor Who – Doctor Whom. Where does your passion for playing with cultural staples like these come from?

T&P: It’s fun! And, besides that, all of us at A Time and a Place Productions are huge pop culture junkies. We love taking what people already know, transforming it into something new, and trying to tap into the heart of it. We always start with reverence and respect for what’s inspired us – then rework it into something big, bold, and bonkers.

We’re all massive lifelong Doctor Who fans, so Doctor Whom was a no-brainer show that satirised pretty much every element of the show while packing in a lotta heart. This ranged from outright stupidity – Daleks became Dorleks, and The Master wound up in a domme/sub relationship – to stuff that was a bit more biting, like how Doctor Whom and his companion wind up trapped by two superfans who demand they go on adventure after adventure for their entertainment. Or how he wipes out all evil in reality, but in doing so accidentally eradicates free will, almost destroying the universe…! There’s always an emotional and intellectual streak to the comedy, which I think helped Doctor Whom become such a big hit with Fringe audiences in 2021.

Doctor Whom’s success gave us the confidence to go even crazier with Space Mystery: an original, intergalactic riff on the murder mystery genre, inspired by deadpan comedies like Airplane!, Police Squad, and The Naked Gun. Jake Rose (Co-Writer/Director) grew up watching the work of ZAZ, and Space Mystery is really his passion project. From that basis of reverence and respect, all of us (Jasper Cresdee-Hyde and Jonathan Powell, Co-Writer/Directors, our Producer, Emma Griffiths, our composer, Thomas Field, and an ensemble cast of eight) have worked tirelessly to craft a show that’s – hopefully – innovative, new, and exciting!

Jake: The story of Space Mystery: A Mystery in Space! winds around characters who are born of cliché, trope and caricature – beginning with the murder of an intergalactic mobster called “Dead Pan” and featuring a character called “Officer Interest”. What do you find in these kind of characters that realises your vision?

T&P: Peeling back the gags and stupidity, Space Mystery is a character comedy, as was Doctor Whom. I think the appeal for us of taking those tropes and archetypes as a starting point is so we don’t begin with a blank slate. Instead, figuring out the character types we instinctively identify with helps to guide us through the writing process, and it’s a lot of fun to reinvent them for 2022.

They also help Space Mystery to tap into a much broader cultural heritage of detective stories, murder mysteries, and a wider sense of mid-20th Century Hollywood – the show is stuffed full of hard-boiled American accents, dastardly bandits, femme fatales, bitter backstories, cheesy ads, and much more. So, we hope the audience will feel a strong familiarity with our characters from the get-go: DCI John Wood channels Leslie Nielson’s iconic Lt. Frank Drebin; mob boss Mr Fax is a Danny Devito-esque pastiche; Officer Interest has all the excitement of Burt Ward’s Robin; and our on-the-run bandits, Lemon and Sherbet, invoke classic criminal double acts like Home Alone’s Sticky Bandits and Some Like it Hot’s Jack Lemmon and Tony Curtis.

But we’re not a greatest hits compilation, or a cosplay of what’s come before. Every character in the play subverts expectations of where you think they’re going, as does the story itself, tackling themes of fatherhood, family, and morality in an age when we’re often deeply polarized by right and wrong. It all harkens back to our core company mythos: taking stuff people know, love, and identify with, and then twisting it into a fresh, thrilling story with great characters and a ton of heart (in space).

Jake: The show seems to be geared toward a sci-fi edge with a healthy dose of classic farce – tell us more about what the audience can expect from the show.

T&P: There’s so much madness rammed into Space Mystery that we’d be better off talking about what the audience shouldn’t expect! We don’t want to spoil too much, but be prepared for a cast full of memorable characters, puns a plenty, and props galore – all bound up in a classic murder mystery told at a relentless, rip-roaring pace. In space!

T&P: Seeing great shows and soaking up the Fringe spirit we’ve been missing for so long. We’re especially excited to see fellow student shows like Cicada’s Children, Loveless, The Calligrapher, and too many more to count! What’s really lovely is our company is a mix of Fringe veterans and first-timers, meaning all of us get to take part in rediscovering the magic of seeing a dozen shows in two days, running on fumes and booze, bumping into your mates on the Royal Mile, and all the things that make the Fringe amazing!

T&P: A martini: shaken, stirred, and thrown in your face. In space!

Catch Space Mystery: A Mystery In Space before it blasts off between August 5th and 27th, except on the 14th at 22:45 in TheSpace @ Surgeons Hall – Theatre 1. Tickets are available through the EdFringe Box Office.