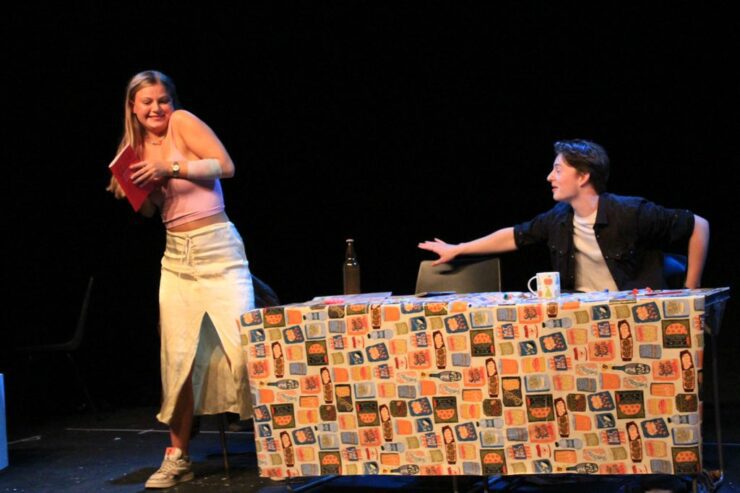 “Can I just kill myself?”

Chaos, confusion and, often, hilarity sit at the centre of the swirling spiral of Madhouse. Set around the kitchen table of a dingy student house, we see six students over an unspecified length of time beset by the troubles that university life brings. From debt to sexuality, pregnancy and self-harm, M Craig’s script is commendable even if just for the scope of problems it manages to handle into it’s forty minute runtime.

The play begins at an unbelievable and unsustainable high for the characters – a party not to be forgotten, with Lidl own-brand wine to boot. A twisting tale of events unfolds, from the heinous crime of Olly and Annie committing flatcest to Goose questioning his sexuality and a pregnancy scare to end all pregnancy scares.

The ensemble cast are all on top form throughout, although there are certainly standout performances. Annie, often the central point of perspective for the audience, is an exceptionally crafted character. She is believable from her unforgettable kebab monologue at the start to the subtleties in revealing the secrets of her past.

Her on-off relationship with housemate Olly is nuanced and frantic. Olly’s sarcastic and cynical demeanour bounces well off all of the other misfits and the show presents well how strained and complicated a shared house can become. The vain and narcissistic Lisa is an absolute delight to watch throughout and her villainous antics are just as riotous and comical as the name she gives her TikTok followers – the “Dua-Lisa’s”.

As someone presently residing in a student house, the set of characters and their misgivings felt almost painfully believable at points and it is clear to see the effort that both Craig and the actors have gone to in order to realise their personalities. While exaggerated stylistically, their reactions to events unfurling are thoughtful and not at all shallow. This was the central challenge to the show’s creators, as there was a chance it may have come off as po-faced if the story lacked the relevant level of contemplation.

As each of the six are slowly exposed to the unpredictable and uncomfortable tribulations of life, you gradually warm to each and wish you had longer to spend with them. The characters of Billy and Goose feel as though they are given significantly less stage time although this somewhat replicates how student houses can feel as a consistently changing space.

Time as a construct in the piece is fluid and it is often unclear whether hours, days or weeks have gone by between each scene. This works well in the story’s favour and bathes the piece in an aura of uncertainty. The show creators have taken particular effort in revealing the true nature of the characters’ tricky relationships by sacrificing the unity of time and action – it works very well.

The staging is occasionally problematic for a socially distanced Fringe setting. Given that most of the action occurs around the table, the audience further to the back may sometimes miss the details which are a quality that keeps Madhouse ticking with fervour and energy. The fourth wall breaking, “direct-to-camera” style introductions are a treat which provide context and nuance without over-exposition and the inclusion of a lip-sync notebook destruction provide for laughter.

Witty and thoughtful, Madhouse is of the ilk of Fresh Meat and Fleabag. Delightfully original and surprisingly deep, it’s a show to catch before term ends and it’s lease is up.

Pictures credit to the creators of Madhouse at The Nottingham New Theatre.