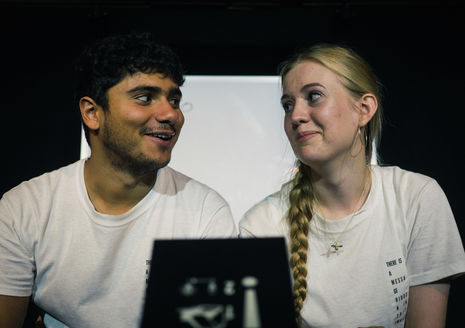 You are unlikely to see a show at the Edinburgh Fringe that’s anything like Cambridge University’s Cicada 3301. A thoroughly original, smart and razor-sharp script with a range of energetic and thoughtful performances from all involved, it’s a compelling dramatic debate on privacy wrapped up in a digital treasure hunt.

The play is based on the real-life Cicada 3301 mystery, a series of intriguing puzzles posted by an anonymous account called, well, Cicada 3301, designed for unknown means: recruitment, perhaps, but to what? The U.S. military? An extra-governmental tech organisation? A cult? Who fucking knows (the cast revealed at the end that some think the show is a new clue). Cicada 3301 (the show, that is) doesn’t either, instead honing in on the humanity behind the hunt. A group of friends who meet every Friday in a basement below a church (Georgia Vyvyan’s Olivia, Beth Hindhaugh’s Hannah and Milo Callaghan’s Billy), cracking Cicada codes, when they’re joined surprisingly by new recruit Bilal Hasna’s Ash.

All of the cast put in strong performances, with particular mention going to Hindhaugh for balancing Hannah’s deep uncertainty and self-consciousness with her equally deep intelligence, and Hasna for his rapid-fire delivery and slow reveal of Ash’s motivations. The story unfolds in a gradual manner, carefully inviting the audience into the lives of these characters so that, by the end, we are fully signed up to the conflict over privacy issues and we truly question what we would do in the character’s position.

The production value is equally wonderful, taking an incredibly playful approach to the subject matter and its theatrical depiction: a journey into the dark web involves turning all the lights off and wearing head torches, visiting iCloud is finding cloud-like cotton fluff with a plastic eyeball attached, and so forth. Amidst the techno-talk and libertarian ruminations, it lends the play a fun dimension of silliness.

Cicada 3301 is a seriously impressive production, and it only grew in my estimation when I found out that Fishbowl Theatre began devising the play just one month before the Edinburgh Fringe. It’s got some great performances and an interesting story interestingly told. Plus, there’s a coded message hidden throughout the production. You’ve gotta go see it now.

A Digital Pint with… Sam Nicoresti, Making a Joke Out Of Being Called Woke at EdFringe 2022