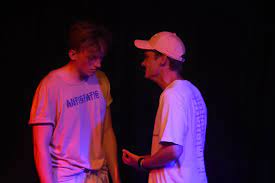 “I could be one of those fucked people who can’t be unfucked.”

When inundated with comedy at the Fringe, sometimes it can do one good to check out some good old-fashioned serious drama about men’s mental health. In which case, go see Numbers!

Told mostly through stripped-back monologues from Henry Waddon’s Jack, the show weaves through the patchy psychological tapestry which seems to be driving more and more men to depression. Despite their theatrical prevalence, monologues are hard work: keeping an audience engaged and attentive to one voice for several minutes is no mean feat. But Waddon does it with ease – and the same goes for Joe Woodman’s Michael, a like-minded soul (or so it seems) whom Jack meets at therapy. The delicate dance of wanting to scream out one’s feelings but also wanting to hide from the rest of the world is done deftly by both men.

The production design is minimalist and evocative; sheets are stuck up reading ‘mirror’ or ‘sink,’ reducing everyday items to pure mundanity so as to shift focus entirely to the performances, as well as to reflect how depression minimalises all that’s around us.

Furthermore, the relationship between Jack and Abi Harindra’s Brianna is arguably the highlight of the show, and I wish there was more to see of it; more than once, Jack would reference interactions between the characters, with one towards the end being significant to Jack’s emotional journey. Why could we not see this play out between the performers?

But no matter: Waddon and Harindra capture the difficulties of maintaining a loving relationship when mental health issues are added to the mix. Should their partner be consistently kind and forgiving? Where do the boundaries lie, and when should they put their foot down? It’s intense stuff, and Numbers doesn’t necessarily have the answers, but it doesn’t need to: every relationship is different, but if the show makes you go away and think about these issues and dilemmas, particularly if they can relate to your own life, then, in my view, it’s done its job.

Numbers is performing at C Aquila, Temple, at 17:50 from August 1 – 26. All proceeds are going to SANE, one of the UK’s leading mental health charities.