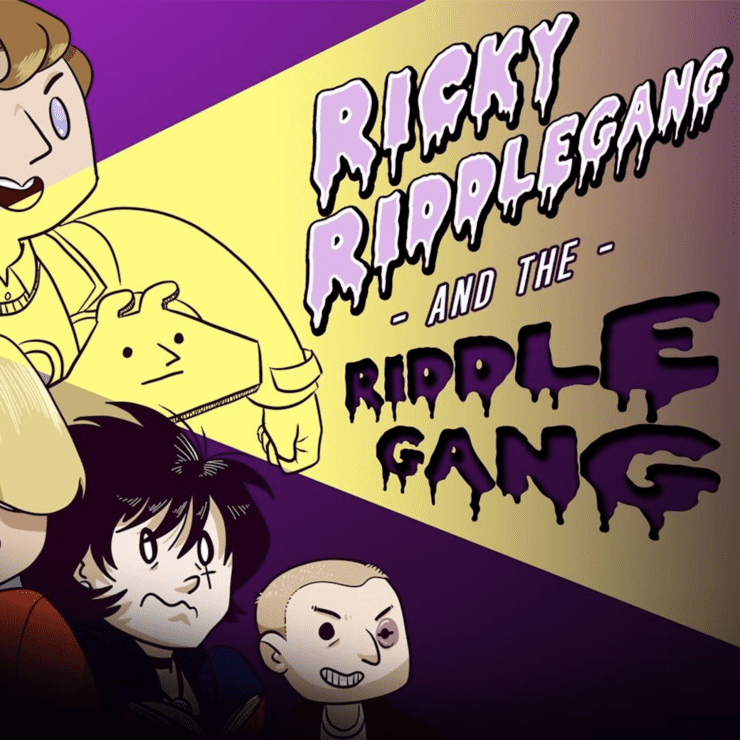 Join us here at the Binge Fringe pub for a Digital Pint with writer-performer Benjamin Alborough. We reviewed his EdFringe 18 show Cream Tea and Incest (Four Stars) which you can read here, and we’re very excited to have an early insight into his new creation produced by Peracals Productions and co-written by Harry J Williams, as part of the Cardboard Exotics Trilogy entitled Ricky Riddlegang & The Riddle Gang. The new show is taking to the Brighton Fringe this May and we sat down to talk about it over a pixelated pint of bitter.

J: Hey Benjamin, how have you been keeping since we saw you last at EdFringe?

B: Hello. I’m very well. Since Edinburgh I have bought a bottle of Dan Aykroyd’s Crystal Head vodka and am deciding whether or not to open it. It’s currently on my desk next to a heart locket containing pictures of Smithers and Mr Burns.

J: So, what can we expect from your new show, Ricky Riddlegang and the Riddle Gang?

B: Riddlegang is to Scooby Doo what Cream Tea was to Jeeves. We’ve not copypasted the characters wholesale from the Hanna Barbera cartoon but we do have similar archetypes; instead of a hippie and a jock we have a goth and a punk. I think this allows us to keep it vaguely nostalgic while not tying us down to the source material. With any luck it’ll also allow us to avoid comparisons to other parodies. Rounding out the Riddle Gang is a kraftwerkesque computer hacker and plucky, wide eyed Ricky himself. We also have a cardboard dog called Dogford. In the original, Scooby Doo couldn’t do anything except eat and talk so we’ve made our animal mascot able to do everything except eat and talk. He’s the world’s first inanimate omnipotent protagonist.

J: Are there any elements of Cream Tea & Incest that have influenced your new production?

B: Both have the same cardboard aesthetic and the same heightened cartoony feel. I want to do at least three of these plays and am currently grouping them under the collective title “The Cardboard Exotics”; a name that is 1/3 descriptive, 1/3 arbitrary and 1/3 a grammatical article.

J: How has it been playing a “hip teen detective”?

B: It’s quite hard to get Eddie Spangler out of my head having played him non-stop for two years. There’s quite a lot of leg-bevelling I need to flush out of my system.

J: Will we see the return of your signature cardboard set?

B: You shall. Look forward to seeing how we attempt to execute the stage direction:

“In front of their eyes, Dogford separates into two identical copies.”

J: How have you found the Brighton Fringe preparation process in comparison to Edinburgh?

B: Edinburgh’s lovely but very corporate. Brighton’s smaller and there’s much less pressure but Brighton Fringe shows (specifically ones at the Warren) still have a huge scope. I grew up in Brighton but have never taken a show there so it’ll be nice to be back professionally. I’m going to get some pier doughnuts.

J: Seen anything in the Brighton Fringe programme this year you like the look of yet?

B: The Glang Show. 30th of May. Starts after Riddlegang finishes so you’ll have more than enough time to see both. I cannot recommend it enough.

J: And finally in keeping with our magazine’s theme, if your new show was a beverage, what beverage would it be and why?

B: I don’t understand…. it is a beverage…. Riddlegang Cola came first and the show was named after it…

J: Thanks for your time Benjamin!

Ricky Riddlegang and the Riddle Gang will play at 19:00 from the 28th-30th May with 14:30 matinee performances from the 31st May-2nd June at The Warren: Theatre Box as part of Brighton Fringe 2019. Tickets are available through the Brighton Fringe box office.